Arts & Culture
Arts Arena
This content is made possible in part by the generous sponsorship support of The University of Minnesota.
Dec. 11, 2008 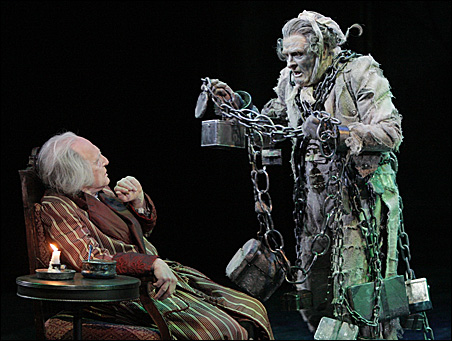 Photo by Michal Daniel
Raye Birk as Ebenezer Scrooge and Nat Fuller as Jacob Marley in “A Christmas Carol.”

Actors have plenty of concerns — remembering lines, staying fit for costumes, paying the bills. But during the holiday rush, there’s another major concern: steering clear of illness.

“We bring in busloads of kids from all these different schools during cold season,” says Guthrie Theater veteran Nat Fuller. “So it’s always a challenge to stay healthy.”

Fuller certainly knows the “Christmas Carol” drill. This marks his 20th season performing in the venerable Guthrie tradition.  During that time, he has played nearly every male lead role in the show, including several turns as the big meanie (Scrooge) himself, not to mention his recent years playing Marley and Topper.

Steady work is always welcome for an actor such as Fuller, who has been a fixture in the local theater community for a number of years, especially at the Guthrie. That it comes in such an engaging package is, well, an especially nice bow to put on the present.

Over the decades, “A Christmas Carol” has entrenched itself as a Minnesota tradition. And while there are plenty of holiday offerings from year to year, there is something special about Big Blue’s annual effort. Much of that is thanks to the efforts of the actors, who breathe new life into a story that is, let’s face it, pretty familiar at this point.

There are plenty of ways to keep the work fresh, Fuller says. That includes adjustments made by director Gary Gisselman from year to year, as the work is ever refined.

And then there are the acting partners. As Marley, Fuller gets to act alongside the excellent Raye Birk, whose mad-scientist-like interpretation has made for compelling theater in the last few years.

Part of what makes “A Christmas Carol” live on is the depth of Dickens’ characters, especially with Scrooge. Fuller knows that journey quite well. “The spirits rip away the shells that he has built around him. It’s a painful process that turns him into a quivering mess of jelly. At the end, his joy is so pure. It’s an incredible journey.”