This weekend, “Live Forever: Elizabeth Peyton,” one of the most eagerly anticipated exhibitions of the season, opens at the Walker Art Center. The show, fresh from its well-received premiere at New York City’s New Museum, stops at the Walker and then leaves the United States altogether to travel through a number of major European museums.

Apparently, we have ourselves a hot show here in chilly Minnesota. 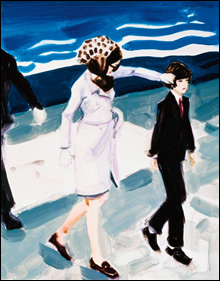 The buzz surrounding Peyton’s portraits has as much to do with the tabloid appeal of her subject matter as it does her painterly prowess. For nearly 20 years, she has served as something of a pop-culture chronicler, drawing inspiration for her stylish, figurative paintings from prominent figures in art, history, pop music, fashion, film and politics. Her color-saturated portraits immortalize figures like Oasis front man Liam Gallagher, Michelle and Sasha Obama, Al Gore, David Hockney, Matthew Barney, punk legend Johnny Rotten, Frida Kahlo and Walt Whitman. There’s a whole room in the show dedicated to her devotional images of the ever-popular doomed megastar, Kurt Cobain. 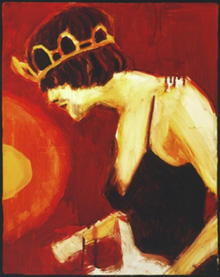 Some who figure in Peyton’s recent paintings are art world acquaintances or personal friends and lovers painted from live sittings with the artist. But the bulk of work on view at the Walker was rendered from existing photographs, video footage, archival materials, and other media ephemera. Full disclosure: I have an affiliation with the Walker in my capacity as editor for mnartists.org, so I’ll leave a specific critique of Peyton’s work to others. But Calvin Tomkins of The New Yorker seemed impressed with her in an interview last October. Here’s a slide show based on that story.

Associate Walker curator Betsy Carpenter describes Peyton as someone who, from childhood, “collects people.” Carpenter continues, “She’s an artist in love with celebrity, but it’s more than that. She’s a romantic, a person in love with history, with literature and art, and with the people who have that creative spark, who’ve left a lasting influence on culture.”

The pieces on view in “Live Forever” provide an overview of nearly two decades of work: Peyton works largely as a painter, but there are some drawings in colored pencil and charcoal represented as well.

There’s a swank preview party for the exhibition tonight (Feb. 13) at the Walker — an “After Hours” event with complimentary food and drink, music by DJ Jake Rudh and karaoke by Arzu, an unusual portrait workshop with a forensic artist, and a screening of the film, “Kurt Cobain: About a Son.”

“Live Forever: Elizabeth Peyton” opens Saturday, Feb. 14 and will be on view at the Walker Art Center in Minneapolis through June 14.