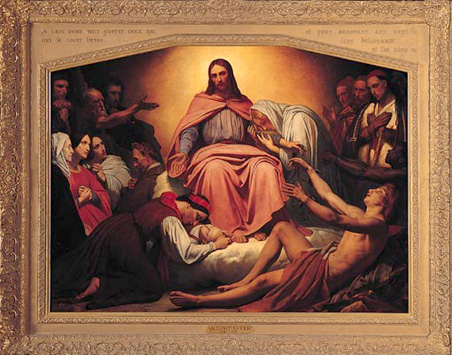 In August 2007, Steven Olson, pastor of Gethsemane Lutheran Church in Dassel, Minn., sought out Minneapolis Institute of Arts paintings curator Patrick Noon. Olson needed advice about how to care for and authenticate the origins of a mysterious painting belonging to the church that had been languishing for years in storage.

You can imagine Noon’s surprise and disbelief when, in the storage vault of the small town’s Wells Fargo branch, he saw an authentic version of the famous 19th century religious painting “Christ the Comforter” (“Christus Consolator”), by Dutch-born Romantic painter Ary Scheffer (1795-1858). It turns out the masterwork had been hiding in rural Minnesota, unrecognized, for 70 years.

Scheffer’s painting — featuring Christ, arms outstretched to console the miserable masses surrounding him — was one of the landmark religious artworks of the mid-1800s, disseminated widely in engravings and other reproductions (including an 1856 lithograph by Currier & Ives).

The earliest and largest of Scheffer’s versions of this painting, which made a sensational debut in Paris 1837, hangs in Amsterdam’s Van Gogh Museum. Throughout the 1850s, the artist revived the image in a series of new, smaller “Christ the Comforter” paintings; it is one of these later pieces, completed in 1851, which was discovered in this rural Minnesota church’s holdings.

According to the museum’s press release Monday, “after a year of careful research and deliberation, Gethsemane Lutheran Church decided to donate the painting to the MIA, which, in turn, has undertaken the conservation and reframing of this significant painting. It will now occupy pride of place in the MIA’s 19th-century paintings galleries.”