Arts & Culture
Arts Arena
This content is made possible in part by the generous sponsorship support of The University of Minnesota.
April 17, 2009 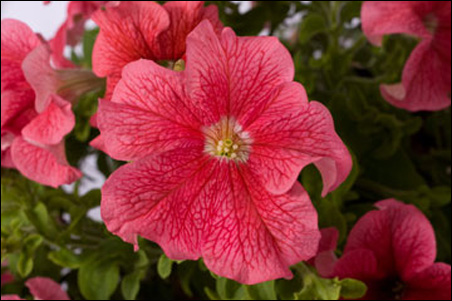 Photo courtesy of the Weisman Art Museum
The “Edunia” is a plantimal in which Eduardo Kac’s DNA is expressed only in the red veins of the flower.

In September 2000, when the Y2K scare was already a well-worn joke, an electrifying story broke — about a bunny named Alba that had been genetically engineered by artist Eduardo Kac to glow in the dark. The provocative bioethics issues raised and the story’s science-of-the-future news appeal sparked public imagination as well as outrage. And, for a week or two anyway, the bunny got enough airtime to give the Summer Olympic Games in Sydney a run for their money.

In fact, the artist behind Alba’s inception has been making what he calls “transgenic art” for years now, although his other pieces haven’t generated the degree of public controversy or fanfare that surrounded his infamous iridescent hare.

Today at the Weisman Art Museum, Kac is unveiling another long-anticipated bioengineering art project: the “Edunia,” a newly created “plantimal” hybrid of the artist, himself, and a petunia. Throughout the flower’s pale pink petals runs a system of delicate red veins, which are the sole locus for the expression of Kac’s own DNA.

The living flower, along with related sculpture, lithographs, and limited-edition “seed packs” will be on view in the new exhibition, “Natural History of the Enigma,” from April 17 to June 21.

The Edunia project has been in the works since 2003. “This is pure invention,” Kac says. “It takes a long time to get the process right. You’re creating life, starting from scratch.”

To bring his creative progeny to life, Kac enlisted the help of a number of scientists, foremost among them Neil Olszewski, a professor of plant biology at the University of Minnesota, who coordinated the fabrication of the transgenic plant and isolated the source of the human gene used in the flower.

For the human component of the Edunia, Kac made a delightfully ironic choice. He says, “There’s a duality here — on the one hand, it’s a living thing like any other flower, it needs light and good soil, attentive watering to grow. On the other hand, the red veins in the flower carry my own DNA; I decided to give the Edunia the very same gene that in my body seeks out and rejects foreign matter.”

“That fact gives the artwork a poetic charge, a creative tension that appeals to me,” he says. “It forces you to think differently about your relationship to the ‘other’ all around you.”

What’s more, he says, “a sculpture is an object, it’s inert. The Edunia is a subject. I think it’s one of the central issues in bio-art, actually — personhood.” He goes on, “My hope is that when you spend time, physically in the presence of the flower, when you confront that duality and tension of the nature of the Edunia itself, you’ll reconsider how you view yourself in relation to other living things.”

“In fact,” Kac says, “to me, the Edunia epitomizes the idea that the spectrum of life is better understood to be horizontal, rather than something vertically, hierarchically oriented.”

When asked about the limits of his work, if there’s a point beyond which he won’t go, Kac says simply, “Nature has not created these life forms, and could not create them without intervention; but Nature authorizes their creation all the same — I know this because it has been possible to do it.”

“And once these transgenic art life-forms are made,” he says, “the fact of their existence supersedes the circumstances of their origins. They are not instruments of my art or will any longer; they are individuals in their own right from that point on.”

“Eduardo Kac: Natural History of the Enigma” makes its world premiere at the Weisman Art Museum today with a free opening reception from 6 to 7:30 p.m. and will be on view through June 21.