Arts & Culture
Arts Arena
This content is made possible in part by the generous sponsorship support of The University of Minnesota.
April 24, 2009 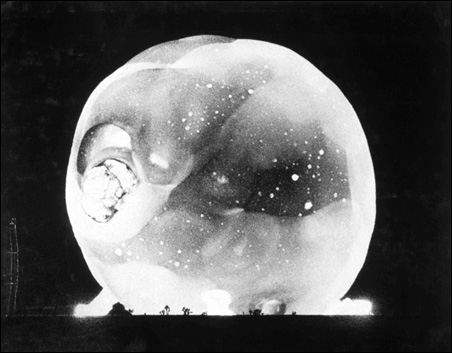 “This is not a conceptual art show,” says Visual Arts Curator Peter Eleey, as he leads the scruffy lot of journalists around the Walker Art Center’s ambitious new group exhibition, “The Quick and the Dead.”

Eleey goes on, “While there are certainly many pieces of conceptual art included here, we don’t intend this to be a survey or a history of an art movement.” Walker Director Olga Viso agrees, saying, “While we’re examining some of the origins of conceptual art in the show, this is an open-ended story” — what the show’s catalog copy calls the “romantic legacy” of conceptual art.

To that end, Eleey assembled an exhibition of work, made from the 1930s to the ’70s, whose creators shared the common impulse to capture in their artwork something true about the nature of “what we know, what we don’t, and what we can’t ever know,” he says. Eleey describes it as a quasi-mystical/pseudo-scientific effort to “key in on a specific time and place, to isolate a single moment,” and then to wring every bit of information and insight from that discrete instant possible. In doing so, Eleey says, these artists aim “to boil the deeper mysteries down to the essentials, what’s most fundamental.”

“The Quick and the Dead” sprawls through the galleries and spills outside — there’s an audio installation by Sunsan Philipsz in the parking ramp; a human skeleton, buried by artist Kris Martin, rests in an unmarked location somewhere on Walker property; Bruce Nauman’s “Microphone/Tree,” (1971) pipes the sounds of the street outside into the gallery space. There’s a previously unrealized work by Spoonbridge and Cherry creator Claes Oldenberg which requires a hundred lemons; there are a few time capsules and electrostatic generators, some spilled milk frozen in time, a fabricated skull and a number of jars of human hair. You’ll also see a pair of dueling fax machines, a dead horse, and a very long piece of yarn. (Click here for information and images of an extensive sampling of the pieces included.)

“The Quick and the Dead” is the first big exhibition spearheaded by Eleey since he took the reins as visual arts curator in 2007; it’s a triumph of coherent curatorial vision and carefully considered installation. The work is cerebral, but witty; the philosophical musings are erudite, but universal at their core. And as varied as the pieces are in form and conception, each one plays beautifully off the others nearby, as if in conversation.

In the end, the constituent mix is erudite, but also surprisingly accessible. That’s not to say you don’t have to put your gray matter to work — you do — but your willingness to dig a bit for context and for each piece’s surrounding narrative is richly rewarded.

There is an After Hours Preview Party for “The Quick and the Dead”  this evening from 9 p.m. to midnight ($35, or $25 for Walker members). The exhibition opens Saturday, April 25, and will be on view through Sept. 27.