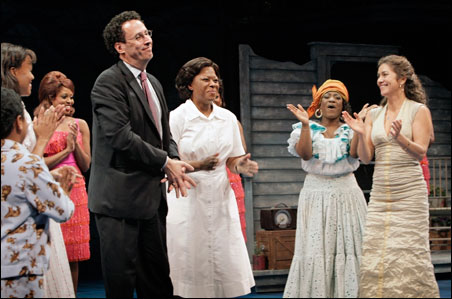 Photo by Michal Daniel
Tony Kushner and director Marcela Lorca, far right, with the cast of “Caroline, or Change.” The show is the first of three productions in the Guthrie’s Kushner celebration.

Tony Kushner often writes with broad, creative strokes that are at turns messy and enthralling, but always engaging. “Caroline, or Change,” the leadoff work in the Guthrie Theater’s Kushner celebration, is no different. Fueled by terrific performances, this musical digs into the webs of relationships, class and race that intertwined in the 1960s South (and, to be honest, still exist today).

Set in Lake Charles, La., at the tail end of 1963, “Caroline, or Change” focuses on the relationship between the title character — a 39-year-old maid struggling to keep her family afloat on a 30-dollar weekly wage — the white Jewish family she works for, and her own family and friends.

Caroline is a complex character. She’s not particularly likable, but she is motivated by good intentions. Upstairs, there are more conflicts. The death of his wife has left Stuart distant; while losing his mother has made Noah angry. And the new wife/mother, Rose, doesn’t know where she fits it. In an effort to teach Noah the value of money, she tells Caroline she can keep any of the loose change she finds in Noah’s pockets.

This leads to a string of conflicts within Caroline, and also ties into the larger story. Her children and younger friends, fueled by the civil-rights movement and the recent assassination of JFK, are breaking out of the molds that have confined them as well. In the end, the question is can Caroline also “change”?

The show turns on the performance of Greta Oglesby, who finds remarkable shades and nuance within Caroline. As noted above, she’s not entirely likable, and Oglesby doesn’t soften those blows. Instead, she does her all to let us inside the character and understand all of the conflict, pain and anger that churns inside.

The rest of the cast is up to the level set by Oglesby, especially Julie Reiber as “new mom” Rose, and Nikki Renee Daniels as Emmie, Caroline’s headstrong daughter who is tasting liberty — and not willing to go back.

Jeanine Tesori’s glorious score is an equal player to Kushner’s book and lyrics. In the music, Tesori brings the swampy Louisiana air to life as she mixes blues, jazz, traditional Jewish and early 1960s pop music together. The only issue isn’t Tesori’s fault, as the amplification sometimes overwhelmed the proceedings, making it difficult to understand the lyrics.

In the end, that doesn’t matter. You can hear every bit of conflict in Oglesby’s voice — and see it on her face and in her very movements. It’s the type of performance worth seeing regardless — and in this case, the entire show is worth any theater lover’s attention.