Arts & Culture
Arts Arena
This content is made possible in part by the generous sponsorship support of The University of Minnesota.
June 8, 2009 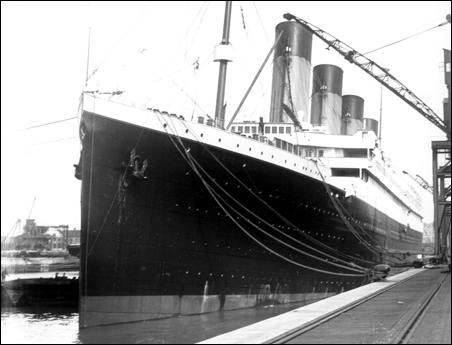 Courtesy of the Science Museum of Minnesota
The Titanic set sail from Southampton on April 10, 1912. It was the biggest and most luxurious ocean liner in the world.

Jack and Rose weren’t really on the Titanic. But Malcolm Johnson, a Swedish farmer heading for Minneapolis, was. And Walter Douglas, son of the founder of Quaker Oats, went down with the ship while on his way back to Minnesota from a European shopping trip.

Minnesota connections to the tragic sinking of the unsinkable ocean liner will add some local flavor to the Titanic exhibit, which opens Friday at the Science Museum of Minnesota in St. Paul.

Cheryl Mure, who is the director of education for the traveling “Titanic Artifact Exhibition,” sought out those Minnesota references to help make the story more compelling to students. She prepared curriculum materials for local teachers who can teach a section on the sinking whether they take the students on a field trip to the museum or not.

Johnson, who had been an unsuccessful farmer in Sweden, was aboard the Titanic that fateful day in 1912, on his way to join the thriving Swedish immigrant community in Minneapolis.

The giant liner hit an iceberg the night of April 14 and sank two hours and 40 minutes later.

When Johnson’s body was recovered, he was fully dressed, wearing a shirt, pants and boots but no socks. His brother claimed that he’d sewn $2,000 into his socks, Mure said. The money was never recovered.

Walter and Mahala Douglas were aboard, too, returning home from a three-month trip in Europe buying furnishings for a mansion they’d built overlooking Lake Minnetonka.

Douglas got Mahala into one of the last lifeboats but then stayed aboard himself.

Mure, who prepares study materials for each of the cities that the Titanic exhibit visits, said she can vividly imagine Mrs. Douglas and other women waiting aboard the rescue ship RMS Carpathia, which answered Titanic’s distress call.

The rescued women waited, watching, hoping that their husbands would be among those saved.

“But only four women were reunited with their husbands on the Carpathia. The rest were clinging to rails, looking and looking. That’s why it’s called the Widow Ship,” Mure said.

Many artifacts from the Caparthia will be on exhibit for the first time ever at the Science Museum. After the ship conducted its famous rescue, it was pulled into war duty and was sunk in World War I.

A recovery operation in 2007 found the ship and recovered many items that will be displayed here.

Another Minnesota connection
John Pillsbury Snyder, grandson of the Pillsbury Co.’s founder, married Nelle Stevenson in January 1912, and set out on a European tour. Returning home on the Titanic, the newlyweds were allowed on a lifeboat and both survived.

As part of the exhibit, the Science Museum has gathered many artifacts of the early 1900s to get visitors in the right temporal frame of mind for the exhibit. And at the start, each visitor gets a ticket with a real Titanic passenger’s name, and they follow along to see if he or she was in first class or steerage, where they slept and ate.

At the end of the exhibit, you’ll see if your passenger survived.

Titanic, the movie
Mure said students and other visitors to the exhibit often ask about Rose and Jack, the fictional heroes of the hit movie “Titanic.”

They weren’t real, she said. Neither is the search for the Heart of the Ocean, the blue diamond in the necklace featured in the 1997 film. (The diamond was based on the Hope diamond, which didn’t travel on the Titanic.)

But the rest of the movie was made with much historical accuracy, she said, and she recommends it to those wanting a pop culture look at the disaster. (The sinking scene might be too frightening for young children, she said.)

Other attractions
Science museum officials cite these highlights of the exhibit:

• Re-creations of both first- and third-class accommodations that give visitors a glimpse into the traveling experience of the Titanic passengers, from the smallest detail to the grandest spectacle.

• Personal items that remarkably survived the harsh deep-sea environment and have been recovered from the wreckage.  Examples include sealskin slippers, a gentleman’s top hat, china etched with the logo of the elite White Star Line, and more.

• A collection of perfume vials, recovered during a dive in 2000, that belonged to a first-class passenger, Adolph Saalfeld from Manchester, England.  The 62 vials, which were preserved by their leather case, still release their fragrances nearly 100 years after they plunged to the ocean floor.

• The massive steel D-Deck door in the side of Titanic’s hull that was, in effect, the “front door” for first-class passengers.

• A simulated iceberg that will give visitors a sense of the environmental conditions at play on the night of the Titanic disaster and test their capacity to withstand touching a frozen surface.

• A telegraph top from the Carpathia’s wreckage which, because of its size and position, proved to be the most difficult item to recover.

• A porthole from the Carpathia that weighs more than 50 pounds and has its original glass and wood still intact.

• A gallery devoted to local connections to the Titanic tragedy, where visitors can learn how the sinking of the great ship resonated here in Minnesota.

Exhibit details
The Titanic Artifact Exhibition will run through Jan. 3.

Science museum members get a break on ticket prices if they attend in June. Ticket information is available online here.

The Omnitheater show running during the exhibit is, appropriately, “Titanica.” It’s a 45-minute nonfiction drama about the 1991 expedition to the Titanic wreck.