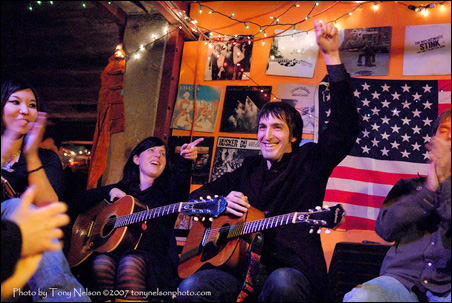 Photo by Tony Nelson
Candid photograph from a 2007 Hootenanny

It all started in the winter of 2006, in the basement of Java Jack’s coffeehouse in South Minneapolis. After two decades of writing about other people’s music for publications near and far, critic Jim Walsh got a hankering to go back to his roots and start making some of his own again. (You have probably noticed Walsh’s byline on this very website; he’s a regular contributor to MinnPost as well.)

So he started writing songs, and under the name “The Mad Ripple,” he began playing a few live shows at Java Jack’s. Those occasional gigs evolved into a weekly unplugged jam session, for which Walsh started inviting a few of his musician friends — from emerging talent to internationally known musicians and songwriters — to join him on stage. “The Mad Ripple Hootenanny,” eventually became a regular watering hole for area musicians and visitors to Minnesota’s scene — a place where artists could come together every Friday night to “swap stories and play some music for people,” as Walsh says, and to do so in a friendly, informal environment.

Walsh’s weekly “Hoot” draws fans and musicians of all stripes — artists like Dan Wilson, Billy Bragg and Ike Reilly stop by when they’re in town, sitting side by side on stage with stalwarts of the local scene, up-and-comers and amateurs.

Photographer Tony Nelson has been attending Walsh’s Hootenanny sessions from the beginning. A photojournalist with contributions to an impressive lineup of national glossies, newspapers and record labels under his belt, Nelson recognized the happy, creative musical mishmash of Walsh’s weekly get-together as a phenomenon demanding documentation. So, from the series’ inception, Nelson has been building a photographic record of the “Hoot” with candid shots taken on-site of fans and performers alike. Inspired by the diversity of local talent on stage, Nelson additionally sought out a bunch of the jam sessions’ regulars for individual portraits. These shots capture musicians and songwriters in the settings that inspire their work — whether that’s in a practice room, on a neighborhood walk, sitting on the living room floor, or biking around town. 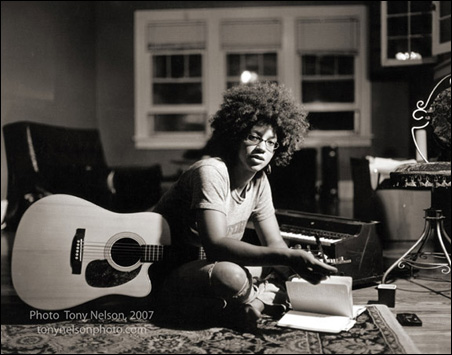 The fruits of nearly three years of Nelson’s photography are now on view at Fox Tax Gallery in Northeast Minneapolis in the exhibition “Hootenanny: A Community.” The collection of work is intimately presented. As a visitor meandering through the gallery rooms at the show’s opening last week, I was impressed not only by the humane sensibility of the work itself but also by the aptness of the show’s presentation.

Your eye is irresistibly drawn to Nelson’s staged shots first. The evocative, beautifully composed black-and-white portraits of musicians working at their craft are, indeed, quite lovely. (If you like, you can see many of them online here.)

But the collection of Nelson’s candid photography, done on-site at years’ worth of Hootenannies, is what steals the show. Hundreds of warmly colored snapshots ring the gallery’s midsection, with an unbroken border of candid pictures thumb-tacked to the wall just beneath the formal portraits. These color images capture the Hootenanny’s musicians, their friends and families in unguarded moments — the artistic camaraderie and familial warmth evident in the photographs is immediate and palpable. You can see a whole host of these winsome color shots here.

Individually, the photos in the exhibition are delightful. Collectively, though, Nelson’s full complement of photographs elegantly immortalizes the ties that bind this community of artists who live and work in Minnesota’s music scene.

You can see Tony Nelson’s photography exhibition, “Hootenanny: A Community” at Fox Tax Gallery in Minneapolis through July 24.