Arts & Culture
Arts Arena
This content is made possible in part by the generous sponsorship support of The University of Minnesota.
July 24, 2009 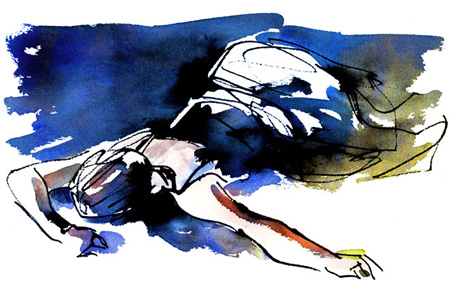 Courtesy of the artist
Mike Reed, painting of a Zenon Dance performer, 2009.

Minneapolis artist Mike Reed has spent the last couple of years shadowing other creative folks: actors and opera singers, dancers and musicians, even hair stylists and chefs. Armed with his sketch pad and pencils, he was a fly on the wall at rehearsals all over town — by Zenon Dance Company, the Minnesota Opera, Jungle Theater, Park Square Theater, the Southern.

He writes, “I like being around other artists – simply being around accomplished performers gave me a psychic jolt that shocked my creative engine into high gear.”

Inspired by the artists at work around him, Reed set out to capture on paper the kinetic energy he saw in their movements and interplay, something essential about the artist’s day-to-day practice. The fruits of his efforts — scads of drawings, prints, doodles, and paintings — have been collected in a new show at the College of Visual Arts, “Mike Reed: Drawn From Practice.” 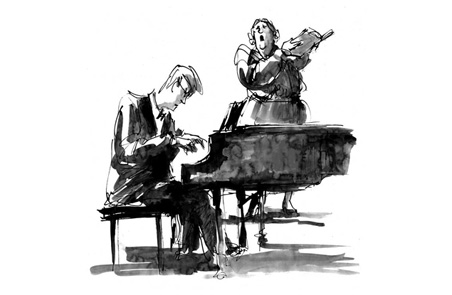 Courtesy of the artist
Mike Reed, a sketch of actors in “Souvenir” at the Jungle Theater, 2009.

The work is exuberant and generous: The gestural force of the lines in his sketches and the splash of vivid color in the paintings play off each other beautifully to capture something of the muscular grace of a dancer’s fluid movement, or the singer reaching for the climactic note, or the actor in medias res.

But as lovely as his renderings of individuals are, Reed’s flair for capturing the small human intimacies of artists working together is even more impressive. With just a few quick lines, Reed manages to capture an unexpected frisson of tension between actors on stage, the hair stylist’s intensity of concentration as she bends over her client’s bowed head, the casualness of a chat between performers just off stage.

But don’t read too much into these pieces, Reed cautions. “The drawings should be taken literally — no lurking metaphors, no subliminal symbols and no editorializing.” He insists that the impulse to put pencil to paper stemmed from simple curiosity about how others practice their art.

If you’re curious, too, you can see “Mike Reed: Drawn From Practice” at the College of Visual Arts gallery in St. Paul through Aug. 8.