Arts & Culture
Arts Arena
This content is made possible in part by the generous sponsorship support of The University of Minnesota.
July 10, 2009 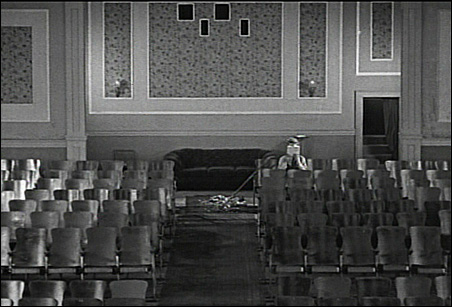 KINO
A scene from “Sherlock Jr.”

Featuring “great stoneface” Buster Keaton as a film projectionist who dreams of being a detective, the silent comedy classic “Sherlock Jr.” begins with an old proverb: “Don’t try to do two things at once and expect to do justice to both.”

In a week from now, the doubly talented Minneapolitan Barry Kryshka — who splits his time between the video equipment rental shop AVS Inc. and the nonprofit Take-Up Productions, with its brand new theater called the Trylon — will have proved the old proverb wrong.

It’ll be the fulfillment of a fancifully Keatonesque fantasy that Take-Up’s Kryshka and his volunteer staff have had reeling in their minds for the last several years, starting around the time when tumult at Minnesota Film Arts turned Oak Street Cinema from a meticulously programmed rep house with a devoted audience into a mere flicker of its former self.

Since then, the well-named Take-Up has picked up some of the slack in local repertory programming, bringing handfuls of old Oak Street faves — vintage noir films, screwball comedies, and Hitchcock thrillers — to indie theaters such as the Heights, the Parkway, and Riverview.

Proceeds from these hugely successful programs (the recent Hitchcock series drew 3,000 fans to a half-dozen screenings) have been funneled into the Trylon, which the local theater-construction outfit Bright Star Systems Inc. has helped fashion into a modestly plush and cozy little space draped in dark red curtains, the sides sloped slightly toward the screen — a room with a view, one could say.

On a recent afternoon, in between blasts from a whirring drill and the occasional pounded nail, Kryshka, 38, is intently focused on the screen’s black border — or “masking,” in film exhibition parlance. “It seems a little uneven at the bottom,” he says with a shrug. “And I think we shouldn’t care.” 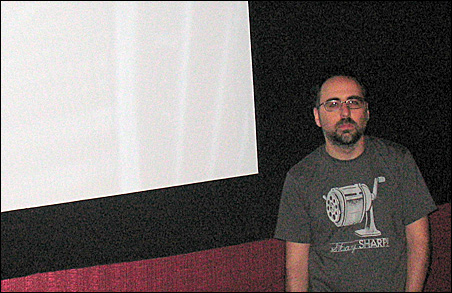 Proudly imperfect in certain respects, the Trylon — via its tiny concession stand (popcorn for two bucks!) — is reachable to customers only through an adjacent gallery space on Minnehaha Avenue. Kryshka playfully calls this a “speakeasy-style” entrance, which indeed suits the theater’s old-time/in-crowd vibe.

Speaking of history: The theater’s namesake venue — a golden-age movie palace in the New York borough of Queens, Kryshka’s hometown — was built in 1939, having taken its own name after a key attraction at the 1939 New York World’s Fair.

Fittingly, Hollywood films of the ‘30s and ‘40s — “Stella Dallas” and “Mildred Pierce,” for instance — are among those being considered for future Trylon bookings by Kryshka, who plans to program the theater for two shows each on Friday and Saturday nights, with each month’s fare being devoted to a director (e.g., David Cronenberg in October) or genre (bank-heist flicks in September and “women’s picture” melodramas in November).

Like the Oak Street of yore, Take-Up will publish quarterly schedules of screenings at the Trylon and other venues, giving cineastes plenty of opportunity to make plans.

Meantime, “Sherlock Jr.” — followed on consecutive weekends by Keaton’s “The Navigator” and “Seven Chances” — seems the ideal opener for a theater founded on dreams.

The scene wherein Keaton’s sleepy projectionist imagines himself jumping into the screen is the story of anyone — Kryshka, certainly, but also his audience — who’s ever been driven to heroic action by the movies.

Tickets for the Trylon’s opening weekend (July 17-18) shows can be purchased in advance.

Screen of Dreams: Trylon microcinema set to open on Minnehaha