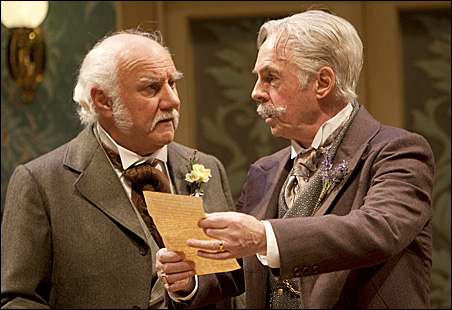 Photo by T Charles Erickson
Peter Michael Goetz and Dennis Creaghan in the Guthrie production of J.B. Priestley’s “When We Are Married.”

In a theater career that spans nearly a half-century, actor Peter Michael Goetz has never missed a performance — though he cheerfully admits that his Broadway career began with a show that only got one performance before it closed.

The Guthrie Theater is where he got his Actors Equity card back when Sir Tyrone Guthrie was running the place. He stayed with what was then a repertory company for 12 years, appearing routinely in nearly every production while also moonlighting on other gigs (remember the “Peter and Connie for NSP” TV commercials?).

After leaving the Twin Cities, the Goetz family — wife, Connie, and sons Michael and Kevin — lived in New York for eight years, and for the past 21 years in California. In all that time, Peter has been working in theater, film and television — though at 67, he says he’s winding down. For the last 10 years, starting with three consecutive turns as Scrooge in “A Christmas Carol,” Goetz has been showing up at the Guthrie for a more-or-less annual appearance (he’ll return to play Scrooge this fall).

A gathering of veterans for Priestly farce
This time, however, it’s turning out to be a reunion of Big G veterans. “When We Are Married,” the Edwardian-era farce by J.B. Priestley that opens Friday for a summer run, reunites Goetz with some familiar Guthrie faces from the 1960s and ‘70s. They include Barbara Bryne, Helen Carey, and Patricia Conolly, along with Linda Kelsey, who ran off to TV land after a single Guthrie season, playing the winsome Miranda in “The Tempest” back in the early 1970s.

Some of these actors are pictured in black-and-white on the Guthrie’s blue building and in photo galleries on fourth-floor lobby walls. Indeed, if you look on the ceiling above the theater’s box office, you’ll see Goetz and Conolly when they appeared in “A Streetcar Named Desire” some 30 years ago.

They also join some more recent old hands: Robert O. Berdahl, Raye Birk, Maggie Chestovich, Dennis Creaghan, Bob Davis, Colin McPhillamy and Sally Wingert. It’s a big cast of veterans, and Goetz has worked with most of them over the years, both here and elsewhere.

“Raye Birk and I were always in the same audition rooms in Los Angeles, looking for movie parts,” Goetz said. “Linda Kelsey and I were both McKnight fellows when the Guthrie had a program with the University of Minnesota. Our characters wind up having a relationship in this play, so it’s sort of full circle.”

Reunion of wedding couples
Priestley’s ensemble comedy concerns three stuffed-shirt Yorkshire couples, all married in a single ceremony, who reunite 25 years later, only to discover that their vows weren’t legal. By coincidence, the day I interviewed Goetz last month was his 43rd wedding anniversary, though Connie was back in California, where she runs a bookstore.

“She never comes out when we’re in rehearsal because she doesn’t want to put up with all of my anxieties,” Goetz said. “But after we open, she’ll come out and spend the rest of the summer.”

Goetz and I first met when we both spent the summer of 1980 at the National Playwrights Conference in Connecticut, where Goetz worked in the acting company and I attended a workshop for theater critics. One of my most vivid memories of the conference was watching Goetz rehearse the title role in a Mel Brooks-style comedy by Michael Chepiga, titled “The Meeting of the Creditors of J. Matthew Spengler.” While Goetz and the other rehearsed their lines, the late New Yorker critic Edith Oliver — a wizened, gravel-voiced, chain-smoking little woman — commented on the quality of each joke in a flat, uninflected voice:

“I think I’ve still got a copy of that script somewhere,” said Goetz, who played a cash-strapped theater producer trying to finance a punk-rock musical version of “Beowulf” titled “Rockabye Hrothgar.” Yeah, it was mostly joke-filled slapstick.

“I thought it was pretty funny, but I don’t know if it ever had any life after we did it,” Goetz recalled.

A long, varied résumé
Over the decades, Goetz has amassed a résumé that would fill a book. He’s been part of big successes — nearly two years on Broadway in “Brighton Beach Memoirs,” for instance, and a bunch of character roles in television and film (“World According to Garp,” “The West Wing,” “Gilmore Girls,” etc., etc.). But he also loves to remember the salad years, when working at the Guthrie meant days that started in the morning with voice and movement classes, followed by rehearsals all afternoon and performances at night.

And like most actors, he relishes tales of disasters. His repertoire includes one of the best ones I’ve ever heard.

After months of performances, Goetz said the backstage preparations became so routine that things seemed to run on automatic. On one night, however, Goetz thought the performance was “Mice and Men” instead of “Midsummer Night’s Dream.”

Goetz said he didn’t realize the mixup even as he prepared for his first entrance — partly because he came on from the same place — the right vomitory ramp — in both shows.

“So there I was down in the right vom as Lennie in coveralls and big boots, watching ‘Midsummer’ and getting ready for my entrance, when suddenly I realized — ‘My God, I’m in the wrong show!’ “

What did he do?

He went on. Goetz has never missed a performance.

“When We Are Married” opens Friday at the Guthrie Theater and continues through Aug. 30. For information and tickets, go here.