Arts & Culture
Arts Arena
This content is made possible in part by the generous sponsorship support of The University of Minnesota.
Aug. 19, 2009 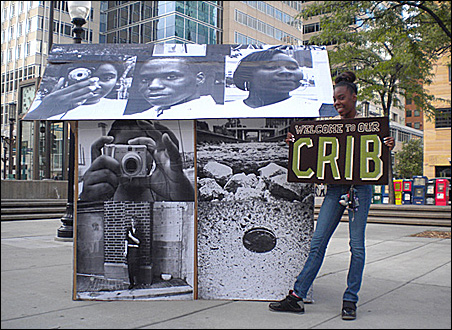 Photo by Lauri Lyons
Cardboard “houses,” on display Tuesday at Peavy Plaza in downtown Minneapolis, helped tell the personal stories of homeless teens as part of the “Home Is Where You Make It” project.

“Homeless teenagers are a largely invisible population,” says Lauri Lyons, an acclaimed New York City-based photographer-in-residence at the Walker Art Center. “We see homeless adults all the time; and you hear about runaways, kids who leave home and return, who temporarily live on the streets. But you don’t really notice the children who live nomadically, moving from shelter to shelter with their families, through circumstances outside their control. They look like anyone else, and so we just don’t see them.”

For her three-week residency project, “Home Is Where You Make It,” Lyons hopes to bring the seldom-heard voices and perspectives of homeless youth out of obscurity and into the public eye. To this end, she joined forces with local spoken word artist Tish Jones and the Kulture Klub Collaborative (a Minneapolis drop-in center where homeless teens can come in for showers, food, mental health assistance and medical treatment, as well as arts and educational programming).

Lyons and Jones worked with the teenagers of KKC to create a mobile exhibition installed at sites throughout the Twin Cities: 5-feet by 7-feet cardboard “houses” emblazoned with the portraits and photographs the young artists shot to document their environments and personal histories, accompanied by written narratives by the teenagers, articulating the ways they conceive of “home.”

“The idea to create cardboard houses came naturally,” Lyons explains. “We considered the ways that people who can’t afford housing have created make-shift, temporary homes for themselves. They often use cardboard and plastic, materials which are freely available and easy to assemble on the spot. I wanted us to use these same materials to make structures that would dovetail with the kind used by our cities’ nomadic homeless populations.”

Half of the three-week “Home” workshop has been spent preparing the youth to create the installation. Jones walked them through writing exercises, coaching them through the process of putting their thoughts about “home” on paper. For her part, Lyons tutored the teenagers on the basics of photography, so they would be armed with the technical knowledge necessary to get precisely the images they wanted.

Then, over a three-day period, everyone got in a big van and traveled throughout the Twin Cities, going to all the locations the teenagers had chosen to document, and the kids started shooting: They took pictures of abandoned houses, flowers, themselves and their friends, strangers, old neighbors, their own eyes and hands.

Lyons laughs, “When I was showing them slides before we left to shoot, trying to walk them through technique, they were joking around and talking — you know how teenagers are. I was never sure they were really listening to what I was trying to get across.”

She goes on, “But once I started printing out their photographs and saw their intensity and sophistication, I realized they’d actually taken in and incorporated everything we’d talked about. Their shots were strong and unexpected; they were really good.”

“And from their photographs, you get to see through their eyes: a perspective on what they find interesting and significant. The vision is uniquely their own, tied to their experiences,” Lyons says. 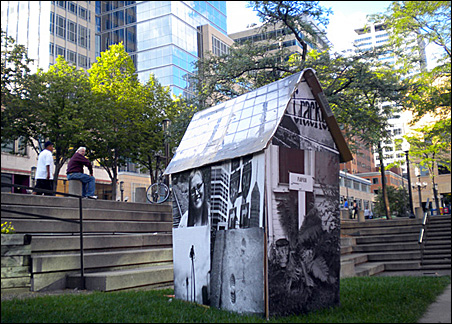 Photo by Lauri Lyons
The cardboard “houses” are a mobile exhibit, which changes locations to spread the word on the experiences of the area’s homeless teens.

The young artists worked with an architect to construct their cardboard houses; then they used wheat paste (the same stuff used to hang posters along the street) to adhere the photographs they’d shot to the exteriors of their structures. Lyons explains: “Even if you’re living a nomadic lifestyle or staying in a temporary shelter, you still want to make your home beautiful, a reflection of who you are.”

“Their conceptions of ‘home’ center on relationships rather than on physical structures,” Lyons says. “For them, ‘home’ is about the people they’re connected to, their friends, parents and siblings. But there’s a sense of struggle in their work, too, which reflects their need to overcome obstacles other people just don’t have to face.”

Lyons says she’s been surprised and gratified by the robust response the project has gotten — in terms of teen participation and public response. She says, “Once we started installing the exhibition around the Twin Cities, I could see how much the images and stories these teenagers had created drew people in. People in the community were interested; they wanted to hear about their experiences, to know more about what they’d made.

“Even better, I could hear these young artists speaking publicly about what they’d done, describing their work confidently to passers-by — to strangers. For them to be so open and proud about what they’ve created, and about their circumstances — it’s really fantastic.”

In fact, the “Home Is Where You Make It” project has inspired Lyons to try this kind of thing elsewhere and, perhaps, on a larger scale. She says, “I’d love to take this idea global, to work with displaced children in other parts of the world on similar projects. Issues of shelter, of home and transition — they are universal concerns.”

The mobile exhibition of portraits by homeless Twin Cities youth, “Home Is Where You Make It,” is installed today in Loring Park. Then, on Thursday afternoon, the installation will relocate to the Walker Art Center, where Lauri Lyons will give a free public lecture, on her work as well as on this new residency project, in the Walker Cinema at 6:30 pm. You can track future installations of “Home Is Where You Make It” on the Kulture Klub Collaborative website.