Arts & Culture
Arts Arena
This content is made possible in part by the generous sponsorship support of The University of Minnesota.
Sept. 18, 2009 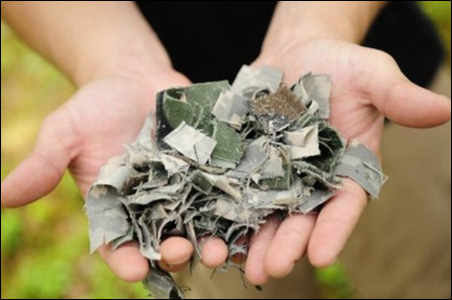 Courtesy of Combat Paper Project
A soldier’s uniform, torn and ready for pulping.

An impossibly young vet rips his uniform into small, army green pieces. As he puts the torn bits into the Holland beater, which will turn them into paper pulp, he says:

“In here there is sand, there is blood, there are tears, there is depleted uranium. There is Haiti, Canada, Hungary, Germany, Ireland, Kuwait, Iraq.”

The soldier — one of the many whose story unfolds in Sara Nesson’s film “Iraq, Paper, Scissors” — is part of the Combat Paper Project, founded at Vermont’s Green Door Studio. Combat Paper artists lead workshops across the country, inviting military veterans to cut and pulp their uniforms and then to turn the scraps into paper, books and sculpture.

Another veteran in the video, former Army medic Eli Wright says, “At some point, when you arrive overseas in a war zone, that uniform stands for destruction and chaos and death. So, to come back and take that piece and destroy it, to create something new out of it and make a positive thing from that uniform – you get the feeling that you’re moving on and stepping on to a new path.”

One of the project’s founders, Drew Cameron, calls the process of taking these “old rags” and making something new from them a matter of “reclamation and reconciliation.”

In addition to the raw materials of their uniforms, these military men and women make use of dog tags, their photos from the field, keepsakes and memorabilia gathered during their tours of duty.

The resulting Combat Paper artwork is powerful — intimate and raw. Take Mike Black’s “Vortex”: It’s a roil of shaggy black, red, and dirty white rings studded throughout with a tangle of half-submerged American flags. Then there’s Eli Wright’s “Open Wound,” a graphically simple piece, but potent: a jagged hole in roughly textured black paper is saturated with a spray of arterial red pulp-paint.

The pieces that emerge from the Combat Paper workshops are varied — book art, sculpture, broadsheet prints — but they are uniformly compelling, expressions of the visceral, psychological costs of war.

This work doesn’t feel like agitprop – these artists’ pieces resonate as authentic expressions, purgings almost, reflective of genuine pain and hope and the sticky staying power of ugly memories. Given the antiseptic media filter through which news stories about our country’s various war efforts trickles into public awareness, perhaps a bit of viewer discomfort in the face of real-world combat is all the more valuable.

Susan Hensel, a gallery owner in Minneapolis, saw Nesson’s film and was immediately smitten with the project. In fact, she featured a Combat Paper portfolio of broadsides in the gallery’s annual “Leap of Faith” group exhibition last year. Public response, especially from veterans who saw the work in the show, was overwhelmingly positive, she says. She knew then that she wanted to work to bring the artists here, to the Twin Cities.

And now, Hensel, along with the staff at Minnesota Center for Book Arts, have done just that: The artists of the Combat Paper Project will be on site at MCBA to create new work and to host papermaking workshops, where local veterans will be led through the process of pulping their uniforms to make a piece of artwork during a residency that will run Sept. 21 – 28. (Find a full schedule of Combat Paper Project events and other “Week for Peace” events on the MCBA website.)