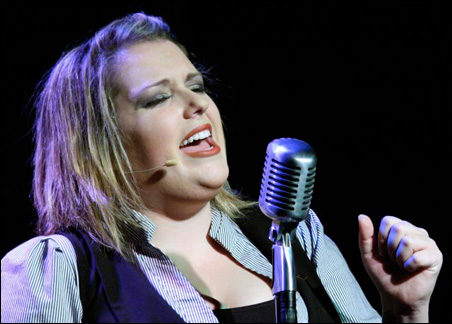 Photo by John Whiting
Alicia Renee, appearing at the Cabaret Theater at Camp Bar through Nov. 14.

Released in 2002, when she just was 18 years old, Twin Cities singer Alicia Renee’s first CD is titled “Wait for Me.” It could have been called “This is what I’m doing now, and it’s pretty good, but wait for me to graduate from college and I will come back and knock you off your feet.”

Also in 2002, Renee performed a Judy Garland tribute at the Women’s Club. The newly minted UMD graduate is back with an updated version of that show, which opened at the Cabaret Theater at Camp Bar last Friday and runs through Nov. 14.

Directed by Kevin Barnard with a script by Greta Grosch, “Judy Garland: Born in a Trunk” is packed with songs from throughout Garland’s career, filled with details about her life (and Renee’s), and enormously entertaining.

Present: all the songs and medleys that Garland fans would expect to hear, sung with passion and understanding. Absent: the pathos, the illness, the broken voice. Renee is a cheerful, engaging young woman at the start of what should be a solid career, if there’s any justice in the universe. Her voice is warm, clear and room-filling.

More than once during the show, I thought of Ethel Merman, but with conflicting feelings because I don’t actually like Merman. Those who do will know what I mean. Renee is a belter. She can also sing soft and low, teasing and playful. She commands the stage, uses the space, comes out into the audience, handles props (hats, feather boas; at one point she even juggles scarves), and seems relaxed and comfortable doing it all. During the big numbers like “I Don’t Care,” “There’s No Business Like Show Business,” and “Over the Rainbow,” she’s incandescent.

I saw Renee perform as teenager, probably at a Twin Cities Jazz Festival (Renee’s father, Steve Heckler, is the festival’s executive producer), and even then she captured my attention with her stage presence and beautiful voice. Her dad’s college dollars were well-spent. At UMD, Renee studied all kinds of music styles and performed lead roles in several musicals. I can picture her in musicals, in more cabaret-style shows like “Born in a Trunk,” in opera.

What I especially enjoyed about Grosch’s script is that sometimes Renee talks about Garland, sometimes she becomes Garland, and sometimes she tells us about herself: a bad break-up with a boyfriend, her parents’ divorce when she was 14, her minivan. The personal details are both charming and ingenuous, lending the show a sense of intimacy and bringing it into the present.

It’s a fast-paced program, at moments a bit too fast, and I’m not sure if that’s Renee’s doing or pianist Stephen Roemer’s. Roemer stepped in for Paul Kovacovic a week and a half ago, when Kovacovic suffered a back injury. It’s his show, too, and his playing is a good match for Renee. At one point they sing together, on Irving Berlin’s “You Can’t Get a Man with a Gun,” which takes on new meaning when sung by a man in a gay bar.

Speaking of the setting, there are moments when the thumping of the music playing next door (Camp has two rooms, the bar and the theater) becomes intrusive; it would be a courtesy to Renee to ramp the sound down a bit when she’s on stage. And I would end the evening with “Over the Rainbow,” which Renee sings with considerable heart and soul, rather than tack on “San Francisco,” which seemed superfluous. But these are minor quibbles about an otherwise satisfying show. Judy Garland fans, this is for you, and for anyone who enjoys fine singing and wants to hear a fresh new voice, one worth the wait.

Alicia Renee’s Judy Garland tribute is over the rainbow