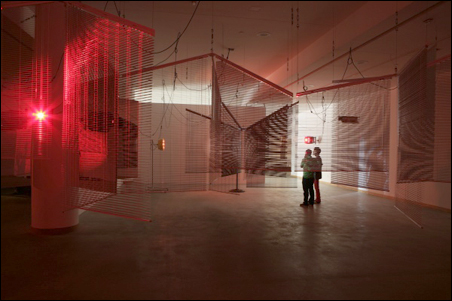 Haegue Yang, a new artist-in-residence at the Walker Art Center, usually splits her time between Seoul and Berlin, but she says that she’s always found a strong sense of “home” to be elusive. Perhaps it’s not surprising then, that her immersive environments share that ambivalence; as you make your way through them, Yang’s installations feel at once intimate and alien.

Using customized venetian blinds and an array of electrical devices —  lights, fans, infrared heaters, scent emitters — Yang aims to give the viewer a carefully orchestrated sensory experience. The artist invites you into her world, but that doesn’t mean she intends for you to feel at ease there. Rather, walking through them, the viewer is most aware of the vulnerability and irregularity of the spaces she’s created. The lines are almost, but not quite, symmetrical. The “rooms” themselves, bounded by blinds, feel ad hoc, neither public nor really private. Light, scent, and heat track and respond to your movements through the gallery, but don’t follow consistent, predictable patterns.

There are narrative and historical elements scattered throughout Haegue Yang’s new exhibition, “The Integrity of the Insider,” but the story she’s telling feels disjointed, as ineffable as it is evocative. It’s like catching snatches of someone else’s memories midstream — an abstracted tale told in color, heat and scent.

She says her recent work — especially the exhibition centerpiece, a large installation called “Yearning Melancholy Red” — in part, reflects her sense of kinship with historical and literary figures who share her neither here-nor-there sensibility, whose lives intersected in meaningful ways, but on the tenuous margins of larger society. Among those she counts as “relatives” are French novelist and filmmaker Marguerite Duras, Korean communist revolutionary Kim San and American journalist Nym Wales.

“The Integrity of the Insider,” Yang explains, is “expressive of both fluency and difference” — the tension between heat and cool, light and dark, self-absorption and empathy, and most fundamentally, between inside and outside, the self and the other.

“I’m interested in deconstructing the experience of those boundaries,” she says, “but I’m trying to maintain the tension between those opposing experiences, too. I want to preserve the integrity of the insider’s experience while, at the same time, reaching out to that of the other.” Yang calls the resulting awareness from this interplay the “condensation of communication,” like the droplets that form on a warm glass when it’s filled with cold water.

In addition to her large installations, the Walker is exhibiting many of Yang’s smaller works as well, including a number of small, sculptural forms made of folded paper — all of which are drawn from the past several years of practice. Her residency also includes a number of seminars throughout the spring, on broad issues like “abstraction, community, and subjectivity.” In particular, the seminar series will focus on the relationship between Yang’s abstract forms and “transnational wartime resistance,” the work and biographical histories of Duras, Wales, and San, as well as the traditional arts of carpentry, knitting and origami.

“Haegue Yang: The Integrity of the Insider” is on view in the Walker’s Medtronic Gallery through February 28, 2010.

Inside out – Haegue Yang’s mystifying, intriguing new installations at the Walker