Arts & Culture
Arts Arena
This content is made possible in part by the generous sponsorship support of The University of Minnesota.
Nov. 6, 2009 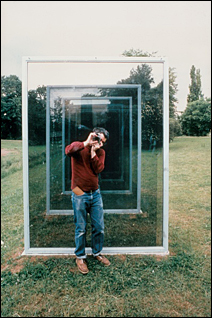 The Walker’s new perception-bending exhibition, “Dan Graham: Beyond,” requires a certain childlike unself-consciousness of the viewer, a willingness to play.

The show, recently arrived in Minneapolis after presentations at the Whitney Museum of American Art and the Museum of Contemporary Art in Los Angeles, offers a dizzying mix of media and forms — from conceptual art and minimalism to experiments with video, writing, and performance, as well as architectural design and wry cultural commentary. This exhibition is the first U.S. retrospective of this influential artist’s career, and it spans 40 years of work, from the 1960s to the present.

Evidence of Graham’s active participation in the evolving rock scene abounds – the exhibition is peppered with lively commentary on and references to movers and shakers in pop music, from Dean Martin to the Kinks. Also on view is one of the artist’s earliest and most famous projects, an astute chronicle of urban sprawl, “Homes for America” (1966-67).

A majority of Graham’s pieces are only truly realized once the viewer walks into their sphere. Speaking about Graham’s mirror-and-glass “pavilions,” during a recent media tour of the show, Whitney curator Chrissie Iles said, “Until people approach these structures, they are quite static; their reflective surfaces blend in with their surroundings, and there’s no real movement. It’s as if they’re waiting for people to enter the room.”

Graham’s perception-bending “pavilions” are elegant, curvaceous structures covered with a variety of reflective surfaces — some mirrored, some transparent — on which bounce reflections, some true-to-form and others distorted, of the viewers around and inside them. His video-based installations, using cleverly positioned cameras to capture and replay recorded images of passersby, necessitate audience engagement in much the same way as his architectural structures.

You need to take your time as you walk through Graham’s show; more important, you must surrender to the roles of both willing voyeur and object of surveillance to feel their impact. As Walker visual arts curator Peter Eleey observed, “Dan asks you to be both the scientist and the rat.”

And you may find that after years of accumulating a protective shield of polite grown-up inhibitions, such a thing may be easier said than done. In fact, that mild viewer discomfort with such scrutiny seems to be a key concern uniting much of Graham’s work, across media.

As I meandered through each of the installations, I kept thinking how much my 3-year-old would enjoy their fort-like, public/private nooks and funhouse appeal. What’s more, he wouldn’t mind mugging for Graham’s cameras and mirrors one bit. In fact, when I take him to see the show, my preschooler will be thrilled with the watching/being watched play of it all – and with his example to loosen me up, I think I will be, too.

“Dan Graham: Beyond” will be on view at the Walker Art Center in Minneapolis through Jan. 24.