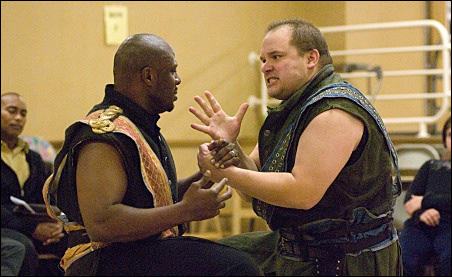 Courtesy of Ten Thousand Things Theater
Ansa Akyea and Luverne Seifert in a scene from “Othello.”

I’m not big into awards, or even issuing a numbered “best of” list. Art really shouldn’t be a competition, or graded on a curve where some are guaranteed of failure. I go into every show with the hope that what I’ll see will entertain, enthrall or even transform me. Sometimes it doesn’t come close, while most of the time it succeeds at some level. Below are the shows, performances and moments where I felt that lovely chill that says “this is great.”

Favorite show: “Othello,” Ten Thousand Things Theater. Tight and direct, but revealing layers upon further thought, Ten Thousand Things’ take on an outsider’s downfall not only connected with the company’s nontraditional audience, but also with anyone who has ever felt the sting, or allure, of jealousy (i.e., everyone). The limitations put on the production by its touring schedule — no lights, minimal set, small cast — all became strengths here, as the show moved with the speed and power of a freight train.

Other favorite productions:
“Romeo and Juliet,” Children’s Theatre Company. An amazing take on such a familiar tale that was fueled by an inspired promenade production that brought the audience right into the midst of the battle between the Montigues and Capulets, and the fast love between the leads. Director Greg Banks showed a deft hand with the form and what could be a theatrical trick became an essential element to the staging.

“The Seafarer,” The Jungle Theater. Now this is a holiday show I can get behind. A group of middle-aged friends and family gather in lower-class Dublin for a night of drinking and cards on Christmas Eve, except that one is playing not for cash but for his soul. Conor McPherson has quickly become a favorite playwright, and the Jungle has a great knack in bringing the shows to the stage.

“The Full Monty,” Theatre Latté Da. By stripping away much of the glitz of the Broadway production, Latté Da found a surprisingly touching tale about the toil of unemployment and the value of self worth, even if that self worth is tied up in going all the way in the male-strip show.

“Caroline, or Change,” Guthrie Theater. The highlight of the Tony Kushner celebration for me was this memory play/musical that looks at the complex nature of race relations in the south in the early 1960s. Terrific performances from top to bottom — led by an amazing Greta Oglesby in the title role — only help to bring out Kushner’s terrific script and a grand score by Jeanine Tesori.

“Ruined,” Mixed Blood Theater. If there’s a theme for 2009, it’s survival in the face of every horror that life can bring. In Lynn Nottage’s “Ruined,” we meet Mama Nadi, the ultimate survivor amid war-torn Congo. The show digs deep into not just the ever-shifting political conflict, but the personal ones that drive wedges between people whose main goal is to survive.

“Skin of Our Teeth,” Girl Friday Productions. Even for Thornton Wilder, “Skin of Our Teeth” is a difficult proposition to stage, but director Benjamin McGovern and a game cast bring all of the wild and stray thoughts — from the origins of civilization to a war-ravaged landscape to a Biblical flood — into focus, making for a beautiful, heading stew.

Favorite touring show: “In the Heights.” A perfect example of how a show could not just overcome a weak book, but transcend it. Terrific music and performances bring an Upper West Side Manhattan neighborhood to life. And the finale, which underscored the show’s theme of finding and making your own home,¬ moved this cynical critic to tears.

Favorite Fringe Show: “Like a Virgin,” Jimmy Hogg. Apologies to all of the fine local artists who packed the Fringe this year, but the best time I had was with this Brit, who brought his latest trip down memory lane to the Twin Cities this summer. Hogg doesn’t pull any punches — especially about his own failings in love — which makes for not just a funny night at the theater, but a piece that hits on the truths about young love better than any 100 romantic comedies.

Favorite performance: Taous Khazem, “Palace of the End,” Frank Theatre. Each of these three one-act monologues packed a tremendous punch, but it was Khazem’s performance as Nehrjas al Saffrarh, an Iraqi woman tortured during the reign of Saddam Hussein and then killed in a U.S. air strike that moved me the most in the past year. Her matter-of-fact delivery only made the abject horror of what the character experienced only that much more harrowing.

Favorite theatrical conceit: Multiple Hydes, “Jekyll and Hyde,” Park Square Theatre. In Jeffrey Hatcher’s adaptation, Hyde is presented by a quartet of performers, who also play multiple other roles through the show. Not only does it bring home the character’s multiplicity, but it adds a sense of danger — you never know if the actor is playing someone sane or absolutely unhinged.