Arts & Culture
Arts Arena
This content is made possible in part by the generous sponsorship support of The University of Minnesota.
Dec. 11, 2009

A wintertime production of Charles Dickens’ “A Christmas Carol” has long been a tradition at Hill-Murray School. For 28 years, students, staff , alumni, parents and folks from the community would show up at the Catholic school’s auditorium in Maplwood to see Ebenezer Scrooge, Bob Cratchit and Tiny Tim — and, of course, the ghosts.

But this year, “A Christmas Carol” is a play of Christmas past, and director John Lynn has started what may well become a new tradition — a Christmas revue with singing, dancing and skits. It’s strung together with movie clips from a host of old Christmas-themed movies. And there’s a running bit with students recounting funny bits from David Sedaris’ chronicles of portraying an elf at Macy’s.

The new show — “A Hill-Murray Christmas: Let’s Go to the Movies” — runs through this weekend with a cast of 75 students and about 20 younger kids from the community. (I have a son at Hill-Murray, although he’s not involved in theater. Our family saw the show together last weekend.)

“We went for the old classic variety show on TV, although the kids didn’t really know about Carol Burnett or Ed Sullivan or Lawrence Welk,” said Lynn, who’s in his third year of running he drama program at the school.

And Lynn said school administrators had no problem bucking tradition.

“They seemed excited about the change; I think if someone would have asked 10 years ago [to put on a different show] it would have been fine,” he said. 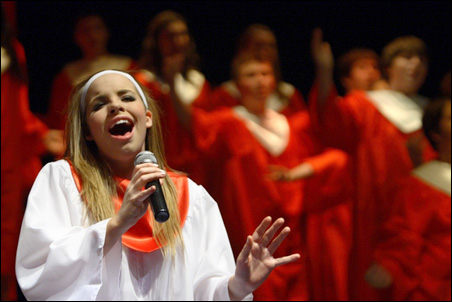 Courtesy of Hill Murray School
Abby Herickhoff is featured during one of the songs in the new revue, which mixes clips from old Hollywood Christmas movies with dance routines, music and skits.

There is a very funny reference to the school’s longstanding tradition: Early in the show, a student, dressed as an elderly woman, rises from the audience and says she’d come to see the Dickens show and demands that they stop this newfangled show immediately and get on with the real show.

So seven students then put on an abridged slapstick version of “A Christmas Carol,” falling over themselves as they change costumes and get most of the major lines delivered in five minutes. A digital clock counts it down on stage, and they’ve hit the mark each time, Lynn said.

“We wanted to pay respect to what was done, and we wanted to have some fun with it,” Lynn said. “And it’s fun to watch [the skit] even if you don’t know about the history here. I told the kids not to worry too much about content, to have some fun, and if they’re not sure what to do next, just fall down again.”

Lots of kids can take part
“We know there’s always a lot of concern about change,” Lynn said. “But we’re getting great feedback from people who seem excited about seeing something different. We’ve got a lot more kids who are singing and dancing on stage than you’d have in a traditional production, and it attracted a lot of kids who’d never been in theater before.”

The school’s drama department puts on five shows each school year, and Lynn said he’d like to continue having the Christmas show be a revue, with a different theme each year.

“A big revue with singing and dancing is a great way to get a lot of kids with talent up on the stage, and it let’s us adjust the show to fit the kids,” he said. “If the school has a great gymnast or a magician, there’s be a way to add them to a variety show.”