Arts & Culture
Arts Arena
This content is made possible in part by the generous sponsorship support of The University of Minnesota.
Dec. 30, 2009 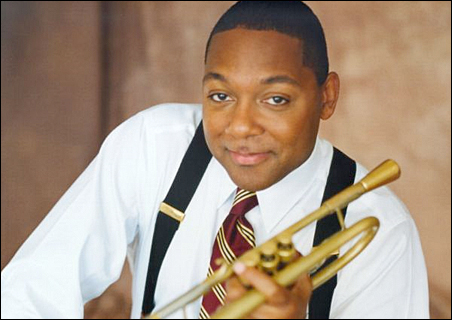 Wynton Marsalis making a surprise appearance on the Dakota’s late-night stage in March was one of this year’s highlights.

In January, MPR gave jazz the boot. Maryann Sullivan was laid off and her three-hour Saturday night program “The Jazz Connection” canceled. Later in the month, Sullivan returned to the air on KBEM with a new program, “Corner Jazz.” Listen on Saturday nights from 8 p.m. to 11 p.m. Sullivan has made a real commitment to featuring area jazz musicians, playing their music and leading interesting, intelligent interviews.

In February, “Mississippi Rag” publisher Leslie Johnson passed away, and the traditional jazz and ragtime tabloid she had edited for 35 years came to an end. Back issues (through December 2008) are still available online.

In March, the Times Bar and Café closed suddenly, leaving many area artists with regular gigs there high and dry. Later in the year, Hell’s Kitchen moved to the former Rossi’s space and became the “new Times,” featuring many of the same artists.

When the Times closed, so did its downstairs bar, Jitters. In November, that space reopened as the Honey Lounge and started booking jazz artists.

A Cecil Taylor documentary
In March, KBEM’s REEL Jazz Film Series brought director Chris Felver to town for a screening of his documentary about avant-garde jazz artist Cecil Taylor. Long may the REEL Jazz series continue; it’s the only way to see jazz films on a sort-of big screen.

Also in March, Wynton Marsalis made a surprise appearance on the Dakota’s late-night stage, performing a lengthy set with members of his Jazz at Lincoln Center Orchestra, in town for two nights at Orchestra Hall.

In June, D’Amico Cucina in Butler Square closed. The Twin Cities lost a great restaurant and a classy jazz venue, a regular gig for artists that include Benny Weinbeck, Tommy O’Donnell, and Gordy Johnson. In September, D’Amico took over the restaurant at the Chambers Hotel in Minneapolis — and brought back live jazz. Wish that Cue in the Guthrie had done the same when it became Sea Change.

In August, Kelly Rossum moved from Minneapolis to New York. Trumpeter, composer, director of the jazz program at MacPhail, leader of his own bands and member of many others, Rossum was a powerful presence on the Twin Cities jazz scene.

New home for Twin Cities Jazz Festival
The faltering Twin Cities Jazz Festival found a new home (and a new lease on life) in St. Paul. Instead of taking place over 10 days in Minneapolis and St. Paul, the festival moved mostly to Mears Park for one weekend in June, drawing large and enthusiastic crowds to hear headliners Esperanza Spalding and Allen Toussaint.

In August, guitarist and composer Dean Magraw canceled all of his shows for the foreseeable future and underwent a bone marrow transplant. The community has rallied behind the much-loved Magraw, scheduling seven benefits and concerts (so far) and a CD sale. Follow his progress on the Do the Dean website.

Improvised music (aka free jazz, avant-garde jazz, etc.) flourished in the Twin Cities, with performances and series at the Rogue Buddha, Art of This Gallery, Homewood Studios, the West Bank School of Music, the Black Dog, Café Maude, the Clown Lounge (which recently expanded its jazz programming from one night to two), Studio Z, and other venues. Rumor has it the monthly series at the Acadia has ended. If anyone knows for sure, please drop me a line.

Last Friday, Dec. 18, Jane Donahue died from injuries suffered in a traffic accident in Lake Elmo. A longtime jazz supporter, Twin Cities Jazz Society member, and fan of all kinds of jazz, she was a kind, upbeat, humble person. We miss her already.

From January through December, somewhere around 3,500 live jazz performances took place in the Twin Cities and nearby. Dozens of CDs were released by area jazz musicians. All this in a year when a National Endowment for the Arts survey trumpeted doom and gloom for jazz and the Wall Street Journal’s Terry Teachout famously asked “Can jazz be saved?”

We live in a thriving jazz community and I, for one, am grateful.

Pamela Espeland keeps a Twin Cities live jazz calendar, blogs about jazz at Bebopified and tweets about jazz on Twitter.

The year in jazz: Highs and lows