Arts & Culture
Arts Arena
This content is made possible in part by the generous sponsorship support of The University of Minnesota.
Jan. 29, 2010 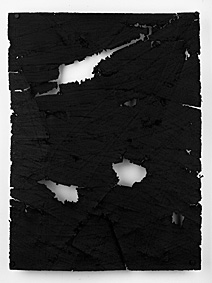 Courtesy of the artist and Conduit Gallery
“Redeem” by Rachel Breen

As patients enter the waiting room for their routine visits to Dr. Sam Willis‘ office, they first pass through the clinic’s Conduit Gallery.

Conduit’s new exhibition — “Seven Meals,” an installation by Rachel Breen — is a good fit for such a communal space. Breen says, “The concept for the show evolved from issues already important to me, but the gallery space at Dr. Sam’s clinic was very much in my mind as I created the work. As I made these pieces, I found myself thinking about bodies and health, and especially, about hunger.”

The exhibition’s title is a nod to the sober adage that there are seven meals between civilization and anarchy. The idea is that after the seventh missed meal, the veneer of civil society begins to crumble, and is soon replaced by desperation and discord.

When I first learned of Breen’s new show, of course, I thought of Haiti. As it happens, the beleaguered nation was very much on her mind in the days leading up to the installation of her show, too. She says, “Here I was, finishing the last few parts of the installation for ‘Seven Meals,’ weeping as I listened to the reports of the devastation in Haiti.” But, she says, “It’s important to remember that hunger and need are universal concerns; people here and all over the world die from hunger and related conditions every day.”

She goes on, “Just recently, there was a study finding that 18 percent of households with children in the U.S. are struggling to pay for food. I’m a mother myself, I can’t think of anything more horrifying than wondering how you’ll feed your children.”

When I ask how she creates her work – delicately torn and punctured paper, drawings of a sort, but ones which rely just as much on the negative spaces, i.e., the holes in the paper, as they do on inscribed patterns. After she’s created her designs on the paper, she then uses its perforations as a stencil, over which she shakes charcoal powder, to create patterned effects on the wall surrounding it. And her primary tool for most of these pieces? A sewing machine.

She describes her installation for “Seven Meals” in metaphorical terms: The act of sewing is significant, as is the use of an everyday tool like the sewing machine. “The activity has everything to do with mending, repairing,” she says. What’s more, “Sewing is such a universal craft – everyone in the world wears stitched clothing. It’s fundamental.”

But Breen doesn’t make stitches; she never threads the needle in her machine. In the context of hunger, she says, the threadless needle running over her paper is an important metaphor, signifiying hope in action without the guarantee of a fix. She says, “The hope is there, and the act of sewing or mending is a significant and necessary part of that, but the missing element of thread creates an ambiguity, too — the idea that merely having the tools to fix what’s broken isn’t enough.”

Her installation for “Seven Meals” contains a few specific images alluding to its theme — eyes, a heart, a neuron — but Breen generally shies away from direct representations and overtly message-oriented images. She says, “I do aim to address these issues of social justice, because I’ve spent so much of my l life thinking about them; but I don’t really like didactic, directive political art. I think that’s why I tend to make more abstract work. I want to raise questions, but I’m suspicious of easy answers.”

Breen says she loves the fact that Dr. Willis’ patients — many of them children — are engaging so directly with her installation. “I love having my work up in a non-gallery gallery, available to people coming in to Dr. Sam’s office for other things; and I’m happy that my work is made so accessible there, and in such a welcoming, nontraditional space.”

“Seven Meals” is currently up at Conduit Gallery in Minneapolis, and will remain on view through March 18; the opening reception for the show will be from 7 to 10 p.m. Feb. 4. A panel discussion on food and hunger, inspired by the work in “Seven Meals,” will take place in the gallery March 4.