Arts & Culture
Arts Arena
This content is made possible in part by the generous sponsorship support of The University of Minnesota.
March 18, 2010 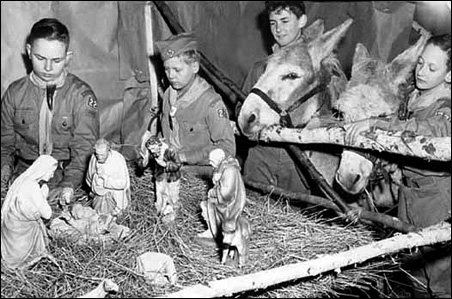 Courtesy of the Minnesota Historical Society
Minneapolis Boy Scout Troop 22 at a Christmas creche, circa 1940.

Should it surprise anyone that a nice state like Minnesota has so many Boy Scouts? Or that Minnesota’s scouting program is as old as its national parent, the Boy Scouts of America?

What may surprise you, however, is that “Honor Bright,” a commemorative centennial book published by the Boy Scouts’ Northern Star Council, is a finalist for next month’s Minnesota Book Awards — one of four in the category of Minnesota nonfiction.

The writer is Dave Kenney, a prolific local freelancer who recently penned a 50-year anniversary book for the St. Paul Chamber Orchestra.  Full disclosure here: Kenney quotes me in both books, using excerpts I wrote for the St. Paul Pioneer Press when I was its music critic and features I later wrote for the newspaper that were based on experiences as a Cub Scout leader.

But, needless to say, he doesn’t dwell on it. And neither will I – except to acknowledge that for many, the worthiness of the Boy Scouts shatters over its “G” issues: God, Gays and Girls (though girls have been involved in Scout programs for older youth since 1969).

“Honor Bright” is, first and foremost, a terrific pictorial history book, the size and weight of a coffee-table volume. Its 238 pages are a cavalcade of photographs and graphics that go all the way back to 1910. In a way, it’s a domestic snapshot of the 20th century, for the history of the Boy Scouts in America and Minnesota is as much about culture as it is about an organization.

According to Scout lore, Scouting was brought to America by a Chicago publisher named William D. Boyce, who got lost on a foggy London street during a business trip in 1909 and was assisted by a uniformed boy (later revered as “The Unknown Scout”) who was part of a British organization founded by Boer War hero Robert S.S. Baden-Powell. Boyce came back to the States, incorporated the Boy Scouts of America (BSA) with the help of some YMCA friends and almost immediately departed from the scene — though he later founded a competing organization.

The modern boy
The BSA was one of many of its type and not as old as some. All were aimed at one of the major progressive concerns of the era – namely, the male adolescent living mostly in a new urban environment that had evolved out of the industrial revolution and the rise of the middle class. Society has changed over the past century, but the problem of shaping these “modern boys” continues to this day. 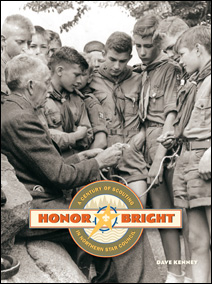 The 20th century history of the Boy Scouts hinges on major events — two world wars, a Great Depression, the “joiner” middle-class incentives of the 1950s, the “culture wars” of the 1960s and ’70s, the diversity and multimedia issues of the current day. Kenney follows all these trends from a Minnesota perspective.

The narrative may lag from time to time for those who aren’t terribly interested in such things as the organization of the Indianhead Council for St. Paul and areas eastward and the Viking Council for Minneapolis and areas to the west. The two councils merged and became the Northern Star Council in 2005.

A unique feature of the book involves its writer. Kenney was never involved in Scouting, though he notes that his father was an Eagle Scout. So in researching the book, he decided to imbed himself, going to the various camps run by the Scouts and attending Cub Pack and Scout Troop meetings. What emerges is a book that is part history and part current reportage. It’s an interesting and ultimately vibrant blend.

First American Indian troop
For those who like to swell with stately pride, Kenney notes that Minnesota was the birthplace of the first American Indian Boy Scout Troop (on the Fond du Lac reservation near Cloquet) and the first troop for deaf boys (at the Faribault School for the Deaf). And space is devoted to stories about troops organized exclusively for Southeast Asian boys (Troop 100 in Minneapolis and 184 in St. Paul) and about the nation’s first Hmong Eagle Scout, Su Thao.

At the same time, Kenney does not overlook stumbles — such as an embarrassing incident in 1980 when the Minneapolis Tribune disclosed that the Viking Council had 17 inner-city troops on its roster that didn’t exist because of lack of interest in poorer neighborhoods. The newspaper story led to a reduction in funding by the United Way and a surge in inner-city recruiting efforts.

“Honor Bright” has edge, in other words. As a spotlight on Minnesota’s social history, it’s a notable achievement as well as a nostalgic entertainment.

“Honor Bright: A Century of Scouting,” 2009, by the Northern Star Council in partnership with the North Star Museum of Boy Scouting and Girl Scouting. Available at Scout Service Centers and at Barnes & Noble bookstores, $29.95.