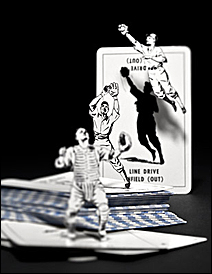 Is there anyone not atwitter about the new Twins ballpark? I’m not particularly enthusiastic about the game, but even so, I’m not immune to a blush of civic pride and a certain eagerness to feel the breeze while catching some innings in the team’s new digs at Target Field.

Among the various baseball-themed goings-on about town, Thomas Barry Fine Art’s “Going Yard: Art About Baseball” is my favorite of the local art scene’s tributes to the Twins’ new addition. With work by more than 16 artists and a few well-known pieces on loan from the Walker and the Weisman, the gallery’s upcoming invitational exhibition looks fantastic.

Also in the mix are Mervin Jules’ “A Hit” (1940) and Joel Meyerowitz’s “Busch Stadium, St. Louis,” (1978) — both on loan from the Walker — as well as Robert Riggs’ “Act of Courage” (ca. 1946) which the gallery borrowed from the Weisman’s collection. Against the backdrop of these notable works, the newer pieces in the show feel like part of a historical conversation about the game rather than mere novelty. And while the work in “Going Yard” may be lighthearted, even whimsical, it’s by no means lightweight.

Tom Allen’s “Backstop” speaks eloquently to the kinetic grace of the game; Glenn Grafelman’s new work, “Long Haul Baseball” nicely evokes both the cerebral and physical toll of the game on its players. Another favorite, Judy Onofrio’s “Curve Ball” is charming and terribly witty. Also keep your eyes out for David Lefkowitz’s clean-lined homage to field topography and Ruben Nusz’s  striking, ink-blotted baseball card series, “Pete Rose Has No Teeth.”

“Going Yard: Art about Baseball” will be on view at Thomas Barry Fine Arts in Minneapolis from April 24 to May 22. There’s a preview reception for the exhibition from 5 to 8 p.m. today.