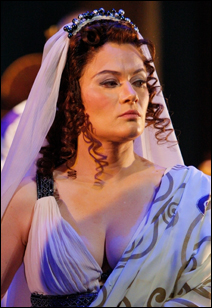 In 1907, the Metropolitan Opera, having given the American premiere of Richard Strauss’ “Salome” and finding its story line too disgusting to justify, dropped the work after a single performance. Today, even at the Met, “Salome” is almost standard repertoire, provided one can find a lithe young soprano with major lung power to sing — and dance — the title role. And yet, let’s face it, even when well done, this sordid tale of a 16-year-old princess of Judea who strips for her lecherous stepfather and makes love to the bloodied, severed head of a saint, is still pretty disgusting.

The striking Julia Migenes sang the role for Minnesota Opera in 1989 in a production that made use of the reduced orchestration Strauss later provided for an opera that often, when the original version is used, degenerates into a screaming contest between orchestra and singers. As a result, the relatively small-voiced Migenes came through loud and clear, as did the formidable — and considerably bigger-voiced — Russian soprano Mlada Khudoley, who is playing the part in the company’s new production of “Salome,” for which the skilled conductor Emmanuel Joel-Hornak is also using the reduced orchestration.

“Salome” opened Saturday at the Ordway Center, and runs through April 24.

An attractively polished, sleek look
This production was staged and choreographed by David Lefkowich, with costumes by Jennifer Caprio, sets and lighting by Steve TenEyck. It has an attractively polished and sleek look: classical columns and arches that stretch into infinity,  along with vistas of oceans and clouds and a surprising — and jarring — tableaux at the start that imitates Leonardo’s painting of “The Last Supper,” with crazy old Herod as Jesus Christ. (Strauss, who hated Christianity, might have liked that last touch.)

It was all impressively sung on opening night. At least in vocal terms, Khudoley almost totally possessed the role, easily cutting through the thick orchestral textures, especially in the final scene where our randy teenager literally makes love to the head of John the Baptist.

As for the Baptist — Jokanaan, as he is known in the opera — Jason Howard, who, with his sculpted physique looked more like Tarzan than the famous Christian prophet, sang his flowing utterances with rich, stentorian tone. Dennis Petersen’s Herod, on the other hand, was not just excitingly sung but was also the evening’s strongest characterization: a depraved, superstitious borderline psychotic whose frenzy and lust became barely manageable as the story unfolded, though it’s hard to believe that Khudoley’s silly Dance of the Seven Veils would turn him — or anyone — on. Elizabeth Byrne’s Herodias was more conventional — sneering and cruel. Christian Reinart offered his fine tenor in the role of Narraboth.

Sense of mystery, unease is missing
And yet, for all its strengths, the production fails in some key regards. The opening scene never establishes the unsettling sense of mystery and unease that is so clearly in Strauss’ brilliant score and even in the Oscar Wilde play on which the opera was based, and some of the voices in this scene were faint on opening night. And though the enigmatic title role can be played in different ways, the approach here seems less credible — and more disturbing — than most.

Rather than being psychologically unbalanced, this Salome is simply a spoiled, arrogant teenager who can’t tolerate being ignored. The progression of events concerns her sexual awakening rather than her mental deterioration, in which case she becomes at the end a truly evil character. Sex equals death in this equation, and presumably this means there’s a bit of Salome lurking in every teenager. No wonder Herod has her killed.