Arts & Culture
Arts Arena
This content is made possible in part by the generous sponsorship support of The University of Minnesota.
April 13, 2010 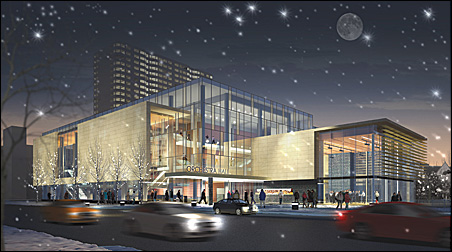 The Minnesota Orchestra has been hitting one home run after another lately. Its budgets are balanced at a time when other orchestras are singing the Deficit Blues and going into hock. In March the orchestra and its music director, Osmo Vänskä, got the kind of “money review” from Alex Ross at the New Yorker that even Donald Trump couldn’t buy, a notice that proclaimed the Finnish music director a “genius” and described the ensemble he leads as “perhaps the greatest orchestra in the world.”

Last week’s presentation of designs for a $40 million renovation and expansion of Orchestra Hall, the Minnesota Orchestra’s home at 11th and Nicollet since 1974, was another coup. Aimed at completion in 2013, the renovation will double the hall’s lobby space, which so many people over the years have found cramped. It will also add two exterior terraces and a new multipurpose “City Room” on the lobby’s west side with an honest-to-goodness gas fireplace in the west wall, intended, we presume, to warm the intrepid concertgoer on a frigid January night and enhance his contemplation of the Beethoven symphony he is about to hear.

These developments are all related, of course. If the orchestra were running up deficits, it wouldn’t be investing big money in refurbishing its home hall — in fact, nearly all of the money for the project, $38 million, has already been raised. And if conductor and orchestra weren’t getting glowing reviews for their records and for concerts in Europe and New York, contributions might start to wither. Just about everybody, after all, likes to back a winner. (Asked if there had been any immediate financial reverberations from Ross’ spectacular notice about the orchestra last month — we envision rich Lutherans writing out big checks in Wayzata — orchestra president and CEO Michael Henson said he had seen no sudden spike in fund-raising. But, he added, “We’ll see how that pans out in the next year or two.”)

The drawings of the refurbished hall that were put on display at the press conference at Orchestra Hall look enticing, in any case. In one of the drawings, the building, all its interior lights glowing and little twinkles of snow dropping from the dark sky, looks like one of those glass balls with the snow inside that we played with as children. This all bodes well for the project, and we can only hope that 2013 arrives quickly.

‘The city has changed’
Moreover, as the two charmingly articulate Toronto-based architects Bruce Kuwabara and Marianne McKenna of the firm that is handling the project (Kuwabara Payne McKenna Blumberg) talked Friday about their concepts and plans, at least one of the long-time Orchestra Hall watchers — and listeners — in the crowd began to think that something has changed since the ‘70s in the way we, at least in this city, perceive art — musical art — along with what we want from it and how we expect it to be packaged. As Kuwabara told the audience, “The hall served the city so well, but the city has changed.”

“The ‘70s orientation was all about Nicollet Mall,” McKenna explained. “Later more people began to enter instead from Marquette and the Skyway and the ramps. We’re going to address that.” 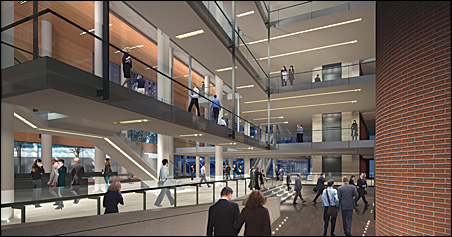 But it isn’t only the city that has changed. Listen to the “design philosophy” published in the program at the Orchestra Hall Dedication Concert of Oct. 21, 1974 — earnest words argued over, one can be sure, by the chief players in the game back then, Kenneth Dayton, Judson Bemis, Stephen Pflaum and other members of the orchestra’s board of directors. The hall, according to point No. 1, has been “designed to serve the concert-going audiences of the future rather than reflect old-world elegance. It should be an honest building, conveying a sense of dignity, simplicity and eye-satisfying proportion.”

Exactly how ancient do those words sound today? Possibly Medieval or maybe early Reformation? Who speaks today of an “honest building” or wants one — or even knows what the term means? In terms of aesthetics, values such as dignity, simplicity and proportion, along with the rejection of old-world elegance, all associated with high modernism, were already on their way out by the ‘70s.

Then came the Ordway
Interestingly, it was the Ordway Center in downtown St. Paul, completed just 11 years later, that touted “old-world elegance” in its design, and that elegance perhaps served as compensation for the Ordway’s dim acoustics. By 2013 Orchestra Hall will have, more or less, the best of both worlds: old-world elegance and the fabulous acoustics it has enjoyed since Day One.

It’s clear, though, that they won’t be using the term “old world.” The goal instead will be, to quote Henson, “a timeless design that won’t fall out of fashion in a decade.” What he’s referring to, of course, is the lobby’s original design, with its exposed heating and air-conditioning ducts, a design that has been variously called “industrial” and “democratic” and, by a few, “playful.”

“I know it took Minneapolis by surprise,” said McKenna, who, along with Kuwabara, talked to a lot of patrons and conducted surveys about people’s attitudes toward the hall. “People here don’t like to complain. That’s a Minnesota thing. But we know they’re a little tired of the design, especially the lobby and the whole traffic-flow problem. They want to like the hall, but they feel the lobby’s cramped.”

“Cramped” was the term also used by the New York Times’ chief critic, Harold C. Schonberg, in his review of the opening concert. He didn’t even like acoustician Cyril Harris’ cubes (“ugly”) that adorned the ceiling and back wall of the hall, an idea aimed at diffusing sound evenly throughout the hall. The hall, though, was an acoustic hit, one of the biggest successes among concert halls in the second half of the 20th century.

“The sound is marvelous and can bear comparison with the best halls in the world,” said Andrew Porter, Ross’ predecessor at the New Yorker. Porter’s reaction was typical. The hall, incidentally, cost $7.2 million to build, and with endowment and other expenses added, the total cost came to $13.5 million. The ever-lovely Candy Spelling has bathrooms that cost more than that.

A changed view of luxury
But let’s get back to our main question: Why are elegance and luxury now acceptable qualities in relation to the arts, even in Minnesota, where people still want to dress down and avoid standing out from the crowd — or at least pretend that that’s what they want? If we blame the Reagan era, and I think we should, we don’t necessarily have to say, as many historians do, that his message was “Greed is good,” which seems to have led to a lot of bad things in ensuing decades. We could say instead that “luxury is good,” or, for the more precise-minded, “At certain times and places, luxury can be a good thing, more or less.”

Starting in 2013, in other words, there’s going to be a luxurious quality to Orchestra Hall, and I think that we, as Minnesotans, raised in self-denial, should give ourselves permission to enjoy that quality, perhaps even to luxuriate in it, even if we have to lie down for a while afterward as soon as we get home.

Consider that much of the best musical art is, in fact, luxurious. A Mahler symphony, for example, can in no way be taken as an exemplar of “dignity, simplicity and eye-satisfying proportion,” to quote once again our original board of directors. Rather, these works are big, extravagant, showy, opulent and full of life. To these qualities, I say, let us all make a date to tip our hats on the appropriate, showy, perhaps snowy, evening sometime in 2013 when Orchestra Hall displays its alluring new dress.