Arts & Culture
Arts Arena
This content is made possible in part by the generous sponsorship support of The University of Minnesota.
May 24, 2010 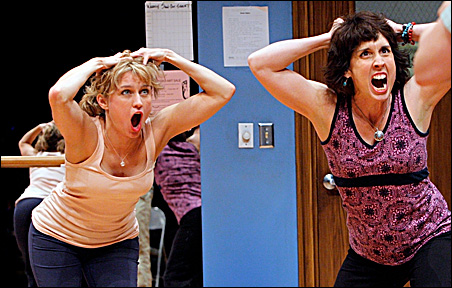 A play about taking an acting class might seem to be too insular for an everyday audience, but Annie Baker’s “Circle Mirror Transformation” is about so much more than playing theater games. Over the course of two hours, the audience gets to know — and care about — a quintet of characters living in a small Vermont town whose only bond is an interest in a six-week summertime acting course.

Baker’s script — and the production currently at the Guthrie’s Dowling Studio, strongly directed by Benjamin McGovern — treats the characters with warmth and humanity. This isn’t some parody poking fun at the earnest folks in the course, but a real exploration of what it takes to build the trust needed to truly act — not just on stage, but through life as well.

Much of the show’s impact comes in the silences. Playwright Baker (who recently won an Obie for the script) specified lengthy pauses — some five to 10 seconds in length — throughout the script. Not only does that reflect how real people act, but it also spreads discomfort from the characters to the audience. The silences make everyone listen closer, even if the next word may just be the number 5. All of these elements — the pauses, the intriguing characters, the strong acting and directing — make these two of the most thrilling and moving hours of theater I’ve seen so far this year.