Arts & Culture
Arts Arena
This content is made possible in part by the generous sponsorship support of The University of Minnesota.
June 30, 2010 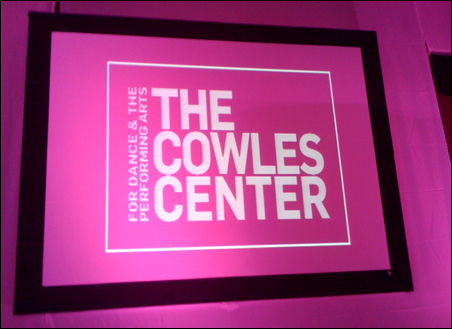 MinnPost photo by Joel Kramer
Mary McColl: “The center expects more than 200,000 people to participate in at least 110 performances, hundreds of education classes and programs, and many other events in its first year of operation.”

During a gala event honoring Twin Cities philanthropists and dance enthusiasts Sage and John Cowles, the historic Shubert Theater was renamed to reflect the couple’s long-standing generosity and support for the arts in Minnesota, particularly their passion for dance. To an assembled “who’s who” of arts patrons, dancers, choreographers and local arts leaders, who raised glasses of champagne and freely offered standing ovations, Sage Cowles (a dancer and long-time board member of the Merce Cunningham Dance Company in New York) and John Cowles (former publisher of the Star Tribune) accepted the honor with their customary grace, intelligence and good humor.

The event took place at the Grain Belt Brewery Event Center, a building converted to artists’ studios with a large atrium at the center. The building is owned and operated by Artspace, the nationally recognized, nonprofit developer of living and working space for artists and arts organizations. Artspace also owns the Shubert — now the Cowles Center — which the organization bought for a dollar and moved to the current location next to Hennepin Center for the Arts [for more on this story, go here]. 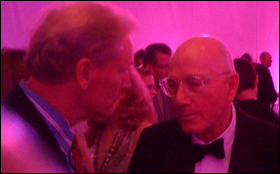 The center’s renovation, lead by Miller Dunwiddie Architects, is currently under way, with the expected opening in 2011. The Cowles Center will be “a flagship for dance in Minnesota,” McColl says, and will house administrative, rehearsal, education and performance space. The center will be linked to the Hennepin Center to the Arts, which currently is home to several local dance companies, as well as the dance schools of Minnesota Dance Theatre and Zenon Dance Company. The center also has a distance-learning, dance-education program that reaches children and young adults throughout Minnesota.

“The center expects more than 200,000 people to participate in at least 110 performances, hundreds of education classes and programs, and many other events in its first year of operation,” McColl adds.

So far, $41.5 million in capital funds from State of Minnesota, the City of Minneapolis, and private individuals, corporations and foundations have been been raised — with $5 million still needed. In addition to the Cowles Center for Dance and Performing Arts, the Cowles family has three other buildings and public spaces named after them: the Cowles Conservatory in the Minneapolis Sculpture Garden, the Cowles Stadium for women’s softball at the University of Minnesota, and the Cowles Auditorium in the University’s Hubert H. Humphrey Center.