Arts & Culture
Arts Arena
This content is made possible in part by the generous sponsorship support of The University of Minnesota.
June 21, 2010 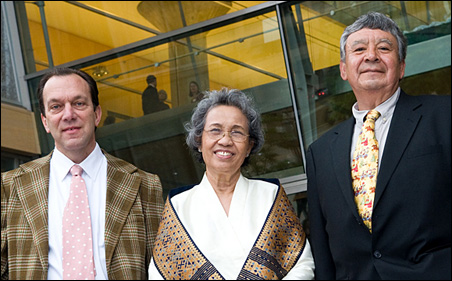 Local artists can count themselves pretty lucky — philanthropic grants and fellowships to support Minnesota artists, at all stages of their careers, are relatively abundant around here (and even more so now, thanks to the new Legacy Fund). Even with the many opportunities for support, though, there are a few especially coveted, big-ticket awards for regional artists — substantial, sometimes career-making grants that can really launch (or revive) a career. Among these, the McKnight Foundation offers some especially generous artist fellowships, as do the Jerome and Bush Foundations.

Summer is award season in the local arts community, and lately my inbox has been flush with announcements of new award recipients: McKnight has recently named a slew of 2010 fellows for their work in theater, dance, film, music, photography, literature and visual arts. Jerome will be doing the same soon, I’m sure.

And last week, the Bush Foundation announced its big winners for 2010.

According to the Bush Foundation’s website, the Enduring Vision Awards are intended to honor established artists who’ve been working in their fields for at least 25 years, and to propel the work of these “mature artists … in the later stages of their careers when they often can be most influential,” but when there has too often been a dearth of financial support available to them.

At $100,000, this award for late-career artists is billed as “the only one of this size and intent” in the country. The Enduring Vision Award was launched in 2007; previous recipients have included painter Frank Big Bear, storyteller Mary Louise Defender Wilson, woodcarver Janel Jacobson, hoop dancer Kevin Locke, painter Walter Piehl Jr., and theater artist Michael Sommers.

Fifteen Bush Artist fellowships recognize those working in the visual arts, media arts, and traditional/functional craft this year; recipients receive awards of $50,000 “in unrestricted funds” to support their work and professional development for one year. Each year’s fellowship winners are selected after an open submissions process by a panel of nationally recognized artists and experts working in each respective field.

Three artists awarded $100,000 for their ‘Enduring Vision’ by the Bush Foundation