Arts & Culture
Arts Arena
This content is made possible in part by the generous sponsorship support of The University of Minnesota.
Aug. 26, 2010 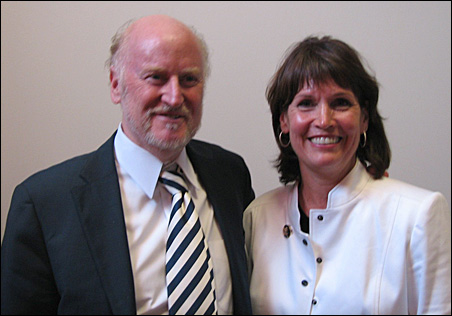 The Minnesota arts community loves Rocco Landesman. He’s chairman of the National Endowment for the Arts, which has a $150 million budget to promote the arts and dispense grants, so what’s not to like?

Landesman had an appreciative audience when he spoke in St. Paul Wednesday about how the arts are an important industry and can help drive an economic recovery in the United States.

Landesman, who was appointed head of the NEA last year by President Barack Obama, is touring the country to promote his new slogan: Art Works.

“I’m a marketing guy — I like slogans,” Landesman said. He’s a Broadway producer, and has had experience in the Twin Cities with Jujamcyn Productions.

“The arts have a role in coming out of the recession,” he said. “And while the arts are in trouble, like every other segment of the economy, we can show that the arts are important in building neighborhoods and building communities.”

The NEA is dedicated to that building notion, he said.

And the role of the arts in the economy is particularly strong in Minnesota, he said, noting the state’s Legacy amendment — the added sales tax approved by voters and dedicated to the outdoors and the arts.

“This is a passionate place, in terms of the arts,” he said. “People care. They’re all in on this. That’s not true everywhere.”

Three things required for strong arts presence
Three ingredients are needed for strong arts presence in a community, he said: a tradition of arts in the community; political leaders who “get it,” and a philanthropic private sector that will step up to provide the essential funding. Minnesota has all three he said; most other places don’t. “If we just had 49 more Minnesotas … .”

Rep. Betty McCollum, who sponsored the appearance, also emphasized the jobs aspect of the arts. More than 8,000 artists work in her district — Ramsey County — and 53,000 artists work in the state, she noted. And the arts and culture industry contributes $830 million to the state’s economy, she said.

She wants those calling for cuts to arts funding to remember that.

“In these difficult economic times and with fiscal challenges in both Washington and St. Paul, there are voices that talk about cutting or eliminating arts funding. They call it a luxury or a waste of tax dollars,” she said.

“Well, I am not interested in wasting our tax dollars, ever — not in the arts, not in defense, not in education. We need to keep making smart investments in jobs and economic development, and working for strong, safe, vibrant communities.”

Strong public funding for the arts and arts education in the public schools are smart investments, she said.

Asked about the cuts in arts education, Landesman said: “You hit one of my buttons. Education has to be more than training teachers to train students to perform on standardized tests. … It’s important that arts remain a part of education from K to 12. … We must assure that arts programs aren’t eradicated and make sure they extend across the country.”

A pilot program in California
He said a pilot program in Sacramento is partnering with existing arts organizations —  museums, symphonies, theaters and dance programs, which often have their own educational components. The arts groups come into the schools with their programs, providing intensive courses in the classrooms. One year, students will have theater, the next year, music; each year a different subject. The cost is low, because the organizations already have education budgets.

“I’m curious to see how it works; we have to have arts education, starting in kindergarten,” he said.

Landesman said it’s hard to make the argument for the arts because the fractured media has stopped covering many aspects. “Only four newspapers in the country now have full-time art critics. There used to be dozens,” he said.

And training in the arts — which thrive on innovation, imagination and creativity — is crucial to the country’s economic survival in a worldwide economy, he said, because it is those traits that will help businesses grow and thrive and compete worldwide.

Landesman is taking his message to dozens of communities around the country, but said the Minnesota swing is more personal, because of his association with the State and Orpheum Theaters while with Jumancyn, which was started by Minnesota native James Binger.

And as a boy he attended camp in Bemidji.

“I’ll come here to Minnesota anytime — in July or August,” he said.