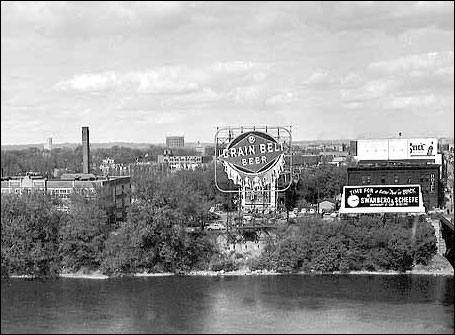 I suppose because I went to De La Salle and grew up under the glow of the Grain Belt beer sign I have a soft spot in my heart for the big un-P.C. lug that looms over the Mississippi River off the Hennepin Avenue Bridge. Countless daredevils — ritual-whipped graduating classes and otherwise — climbed the Minneapolis sign back in the day, which gives it a romantic teen-thrill luster. But to me it’s more than that:

It’s a landmark, a beacon, a… hell, I’ll just share bits of a letter I wrote to the Star Tribune in August, not long after the I-35W bridge collapse:

“To commemorate the 35W bridge tragedy, I think we should light up the Grain Belt beer sign on Nicollet Island, which has been dark for some time. I’m sure it takes nuclear power to run it, but I’d be willing to cut back on the Christmas lights this year and skip Holidazzle for the rest of my life to get the big bottle cap up and glowing again.

“It’s an icon, something that says ‘Minneapolis’ and ‘cheers’ and ‘city of lights USA’ to people all over the world. Reigniting it would be a fitting tribute to the river itself, and all the souls who’ve gone before us. For the 35W bridge victims specifically, we could honor them with a bumper sticker: ‘Throw Out the Bridge Collapsers.'”

My personal email inbox was immediately filled with enthusiastic replies — from people asking what they could do to help, to fans of Hold Steady, who name-check the rusty relic in “Party Pit.”

I came back to start a band, of course
Saw her walking through the Crystal Court
She made a scene by the revolving doors
She’s gonna walk around and drink some more
So we walked across that Grain Belt bridge
Into bright new Minneapolis

But the most informative response was from Winthrop E. Eastman, the retired Houston, Texas-based businessman whose family founded the Grain Belt Brewing Co. and who owns the sign and the land it’s built on.

“There is nothing more I’d like than to see it relit,” said Eastman. “The last time that sign was refurbished and relighted was 1986. I stood on the west bank of the river with my hand on a big switch along with the hand of the then mayor. At the appointed time we threw the switch and the old sign came back to life. There were about a thousand people there that evening and everyone cheered long and loud.”

A reenactment of that scenario isn’t likely anytime soon: The sign contains a complex array of neon tubing and more than a thousand energy-sucking incandescent bulbs. Eastman has looked into alternative lighting methods, including LED, which would cut the operating expense by 80 percent. He and Ted Marti, owner of the Schell Brewing Co., which now brews Grain Belt, have discussed ways to generate revenue to get it up and running again. But Eastman also knows any effort to relight the sign could be a political minefield.