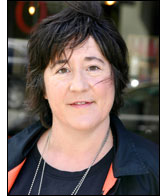 She’s got everything she needs; she’s an artist — but, luckily for us, she does look back.

A question, then, for Christine Vachon: What was your biggest challenge in producing “I’m Not There,” director Todd Haynes’s radically experimental Bob Dylan biopic and the year’s most unlikely movie?

Maybe the hardest part was persuading Oscar-winner Cate Blanchett to play the coolest of six pseudo-Dylans (circa 1965-1966, of course)? Or getting Haynes what he needed monetarily — just under $20 million — to span two times-are-a-changin’ decades in the wild life of the Minnesota-born creative genius? Or keeping studio boss Harvey Weinstein (a.k.a. “Harvey Scissorhands”) out of the cutting room?

Vachon, sipping wine on an office couch at the Walker Art Center during a screening of “I’m Not There,” doesn’t hesitate to answer.

“Getting into the music,” she deadpans. “I mean, I did get into it, but on my own terms.” What were the terms? “The terms were: I’ve got to produce this movie with this music, and it would be easier for me if I actually enjoyed the music.”

So it’s fair to say that Vachon is no doctoral student in Dylanology, but, as the producer of some of the most ambitious and challenging American indies ever made — “Kids,” “Swoon,” “Happiness” and “Boys Don’t Cry,” along with Haynes’s “Poison,” “Safe,” “Velvet Goldmine” and “Far from Heaven” — she could teach a graduate-level film production course in her sleep.

So busy, she needs three Blackberries

Not that Vachon sleeps much. Besides having two films ready for release, one film in post-production, three in pre-production and three in production, she also has a young daughter and two books, including “A Killer Life,” to her credit. And she has three Blackberries. Is one of them like the Red Phone in the Pentagon or the White House, the one that rings only if we’re at DefCon Four or whatever? “Nah,” she says. “This is just a motley collection of buzzers, that’s all.”

With that, one of ’em starts buzzing — and we stop talking for a few minutes. Vachon is co-producing a Dylan tribute concert in New York the following night(!), and “there’s still a lot of stuff I have to do.”

Somehow Vachon maintains a sense of calm and a sense of humor, evident in her short, witty replies to some of the interviewer’s less scintillating questions.

Did the timing of Martin Scorsese’s recent Dylan documentary help with the financing of “I’m Not There”?

Vachon: “Well, that [Scorsese] film would’ve helped a lot more if it was coming out now.”

Was it a huge, complicated affair to secure the rights to Dylan’s songs?

Is there anything about this much-discussed movie that hasn’t yet been discussed?

Vachon (over the loud humming of the Walker’s after-hours vacuum cleaner): “You can’t ask that of the subject!”

Finally: What does the producer hope for the release of “I’m Not There” today?

Vachon (more seriously now): “My expectations for the movie? On the one hand, I feel the audience is really anxious to see something new. In terms of the whole biopic renaissance or whatever, I feel like people are experiencing biopic fatigue. They want to get past the formula: Boy genius was really amazing, hit a certain peak, went all the way down to the bottom, then redeemed himself somewhat, reconciled with his old friends, and prepared to die. No one wants to see that anymore. In some ways, our movie is so unusual that it actually has a chance of breaking through. But who knows?”