When the movie “The Jane Austen Book Club” piggybacked in theaters last month on “Becoming Jane,” a film centered on the love life of Austen herself, moviegoers got a double opportunity to learn from the complexities of love in the eyes of the 18th-century novelist.

Much like her books, both films examine love’s predicaments, such as whether to marry for love or money, how control gets in the way of coupling, what lovers can do to bridge their differences and the need at times to weather tough stuff to stick with the one you love. Most intriguing is the way “The Jane Austen Book Club” movie plot, based on Karen Joy Fowler’s 2004 novel with the same name, solves the pressing romantic woes of virtually all its club members — male and female — as they identify with characters’ issues in six Austen novels the club is reading.

So I had to ask: Can a book club really change your life?

Sure, says Lauren Cobb, a Jane Austen fan who teaches literature and writing at Bemidji State University. Even minus the club, books and films change people’s lives, too. Novels and movies are so pervasive in our culture that they pack a wallop, especially when it comes to romance. “They’re pretty much the script for how we should live our love lives,” she says.

It’s the talk in a book club that intensifies the impact on club members, Cobb says. “They’re making judgments like, ‘Marianne Dashwood (a character in Austen’s “Sense and Sensibility”) should never have done that,’ ” she says. “That spices up the conversation because it brings in different points of view. But the literature isn’t all of what participants are talking about,” she says. “They’re constantly relating it to their own lives.”

While some people take more away from fiction and films than others, a personal response is typical for almost everyone, she says. “We relate through what we bring to it.” 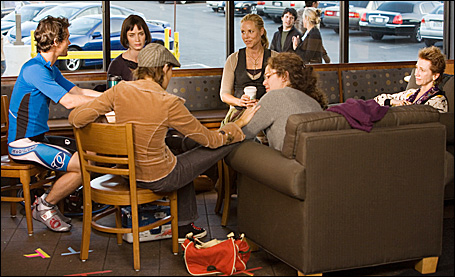 Sony Pictures Classics
Members of ‘The Jane Austen Book Club’ resolve their romance issues during the course of the film, based on the book by Karen Joy Fowler.

Along with love, common themes include relationships within families, cultural heritage, cross-cultural relationships and change over time, such as effects of the feminist women’s movement, she says. In that category, “Becoming Jane” could be considered a primer.

But back to the subject at hand: love as portrayed by Austen. Though she never married and died in 1817, her books’ models of romance are enduring as much more than ancient history. At least a half-dozen of Austen’s novels have been made into movies or TV productions, and dozens of books have been written about her work.

If you missed the latest Austen movies but are still pining for her wisdom, consider reading “Jane Austen’s Guide to Dating,” by Lauren Henderson (Hyperion, 2005). The book offers quizzes designed to determine which characters in Austen’s books you and your mate most resemble.

You just might garner the sense (and sensibility) you need to enrich your love relationship.