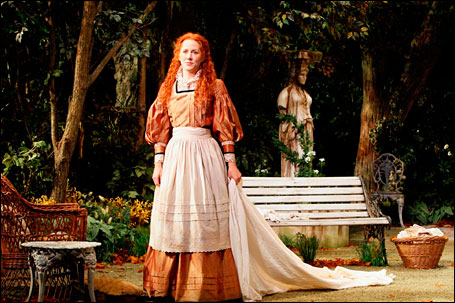 Photo by Michal Daniel
Sarah Agnew portrays Margaret O’Donnell in the U.S. premiere of Brian Friel’s “The Home Place” at the Guthrie Theater.

St. Patrick’s Day is still four months off, so what’s with all this Irish stuff?

Right now, two of the leading theaters in Minneapolis — the Guthrie and the Jungle — are presenting plays by Irish playwrights set in Irish locales.

“Shining City,” the Conor McPherson play at the Jungle, is getting a Midwest premiere. Meanwhile, the Guthrie, which was founded by an Irishman and is currently run by one, this week finishes up the American premiere of Brian Friel’s “The Home Place.”

In theater circles, getting the first American production is considered to be a major coup — a fact noted by one New York critic (Terry Treachout of the Wall Street Journal) who came out to see “The Home Place” and then lamented about such an important work being consigned to a theater in the Midwest, of all places. Treachout wrote he’s “ashamed” for his city.

And just a month or so back, the Guthrie Theater lent its Dowling Studio space to Frank Theatre for its production of Martin McDonagh’s “Pillowman.” That’s three Irish playwrights in as many months.

Guthrie artistic director Joe Dowling, who gives a talk tonight in his namesake studio about Irish history and identity, thinks American audiences have a particular affinity for Irish plays.

Why are we so fond of Irish plays?
The first reason is obvious: The Emerald Isle produces great playwrights — and at 78, Friel is generally acknowledged to be one of them. Indeed, the Irish often chuckle at an irony reflected in “Translations,” a play Friel wrote in 1980 about British efforts to anglicize Ireland in the early 19th century.

“The English forced us to speak their language and then we taught them how to use it,” Dowling said, chortling in a way that suggested he’s said that many times, always with immense satisfaction.

“Translations,” incidentally, was given its first local production back in the early 1980s by Actors Theatre of St. Paul, then a resident company of young actors who were all adept at doing Irish accents. About a decade later, a Broadway production of the play won three Tony Awards. It took awhile to get there.

Other reasons for loving Irish plays are more speculative. We like to think of ourselves as a hyphenated culture — Irish-Americans, Polish-Americans, Italian-Americans, Norwegian-Americans, and so on. For the most part, these are sentimental affiliations, yet they also reflect a common mythology: that Americans came from elsewhere, often to escape adversity and oppression.

“There’s a duality of loyalties (in Friel’s plays) that Americans seem to understand,” Dowling said. “Of course, Friel also has the capacity to take what’s local and immediate and make it universal.”

I like to think that another theme in many of Friel’s plays — cultural imperialism — is something Americans also understand, sometimes with regret. When the British came to Ireland, they renamed all the landmarks, took ownership of the land and forced the Irish to give up their native language. What did we do to the Native Americans?