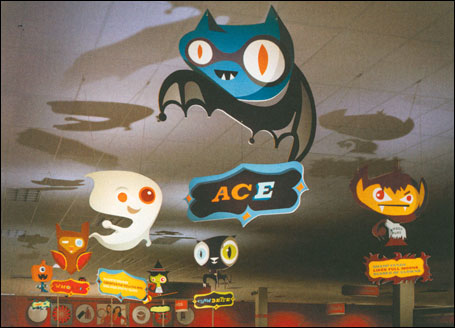 “Design” is the new black. Or maybe the old black, but at any rate, you can’t say the whole idea hasn’t been getting its due, between discussions about the new I-35W bridge and the Target “Design for All” campaign a few years ago.

That’s all to the good, basically. Yes, a vague, airheaded concept sometimes threatens to substitute “design” for actual taste, or even world view — “I buy, therefore I am.” Still, given a choice between design, even arguably bad design (that goofy Jetson-esque Hi-Lake shopping center) and depressingly design-free zones (low-slung industrial parks, which never fail to bum me out), I’ll take design any day of the week.

Besides, you can’t avoid it. Liquor bottle labels, event posters, magazine covers, museum exhibitions, the new Target prescription bottles: Every last one of them has been designed by someone. (OK, even those horrible industrial parks have been designed, but they’re of such a negligible, careless, soulless variety, I still think they qualify as “design-free.”)

To see what the design world thinks is the best among its ranks from the last year, check out “365: AIGA Annual Design Exhibition” at the College of Visual Arts gallery in St. Paul. (Note: The design exhibition on the AIGA website is the latest one; the one at CVA is the last stop for the traveling exhibition from the previous year.) For the curious: AIGA stands for the American Institute of Graphic Arts.

In decades past, design almost seemed to define an era: 1920s and ’30s art deco, ’50s space-age tailfins and atomic/ectomorphic Formica designs, for example. It’s hard to glean any overarching zeitgeist from this show, except maybe that there is none. The show features clean-lined looks, like the self-consciously “design-y” signage at Bloomberg New York headquarters (by Pentagram Design), and the Walker Art Center’s “graphic identity” (not a brand!) including letterhead, website and entry badges (lots of geometric blips and blops); to retro nostalgia, like Pop Ink’s Walter Keane-ish graphics by Charles Anderson Design (also local), to the delightfully whimsical creatures on Little Monsters shampoo by illustrator and graphic artist Nathan Jurevicius for Turner Duckworth. The latter will lure in a certain demographic of parents as much as it will their kids, at whom the product is ostensibly targeted. The show also includes video and animation, so din-o-phobics beware: It’s noisy.

The highly trumpeted Target prescription bottles are here, too. They may well be a case of principles trumping reality. They offer a “design solution” for some issues, mainly patient info, which, OK, is the most important. But as a consumer, I’m still not sold. I started using them when I had to switch health plans and pharmacies, and the streamlined bottle looked kinda cool. But it’s a big fat pain in the rear to flip the thing upside down to open it, then to flip it back over because it only stands up on the one end. When I’m shaking out my meds with my first cup of coffee, I want life as easy as you can possibly make it.

It also seems odd that for a show touting the virtues of design, this one seems awfully drab: for anything 3-D, it was simply a lot of small objects arrayed on steel tables. Eye-catching it’s not, but the advantage is you can actually touch the art, or the merchandise, as the case may be. It brings up a funny conundrum, though — the items seem to have more life in them on store shelves, in a crowded consumer milieu. (Maybe it’s the repetition/abundance thing, with rows of the same thing lined up on the shelves, as far as they eye can see.).

Still, the show helps focus the mind of what design can do. At its best (or worst?) it works, like that Target Sunday flier that has been casting its graphic spell on me for years. I pick up that thing every week and all of a sudden I know that yes, a comfortable, bourgeois life really can be mine; there’s something about those orderly products, so cleanly arrayed on that pristine, white ground that finds a chink in my hard-core Dumpster-diving armor and touches my soul every time.