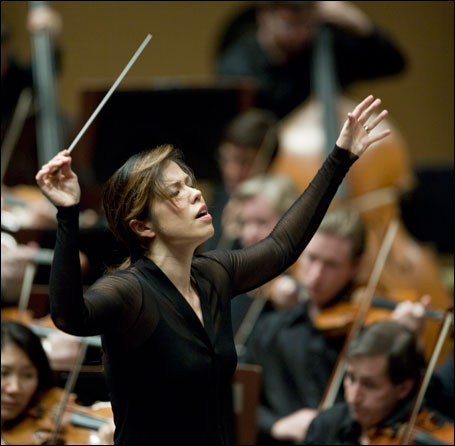 One of my former colleagues was fond of saying, “Classical music isn’t for everyone but it’s for anyone.”

By that he meant, classical music may not be to everyone’s taste but it can appeal to anyone who chooses to listen, even someone who doesn’t know much about the music.

On a Web site called “Meet the Music,” the American Symphony Orchestra League puts it this way: “There’s no need to study. The music will speak for itself. Just come and enjoy!”

A glance at the league’s Innovations Forum shows that orchestras all over the country are actively seeking new ways to build their audiences through what used to be called “music appreciation.”

To Minnesota Orchestra violist Sam Bergman, the answer is obvious: “As with any art form at any level, the more you know, the more interesting the experience is.”

An invitation to come closer
Together with Assistant Conductor Sarah Hatsuko Hicks, Bergman hosts the orchestra’s new series, “Inside the Classics,” which debuted Nov. 14 at Orchestra Hall. (This season’s two remaining programs are scheduled in January and April.)

In his next breath, Bergman confessed that when it comes to inviting people closer to the music, “orchestras have done a bad job. We tend to give off a vibe that suggests, ‘What we’re doing is really important and we refuse to tell you about it,’ ” he said.

Here’s how critic Alex Ross puts it in his new book, “The Rest is Noise: Listening to the 20th Century”: “In the classical field it has long been fashionable to fence music off from society, to declare it a self-sufficient language.”

Bergman, Hicks and the orchestra were remarkably forthcoming about “The Firebird” at the gathering this month. The first violins donned plastic tiaras and the second fiddles took up toy swords and battle axes to act out part of the story Igor Stravinsky set to music in his ballet score. Violinist David Wright, whose bushy brow and beard reminded Bergman of the Unabomber, doubled as an evil sorcerer.

If a few musicians appeared to embrace their roles more tentatively it was only because, according to Bergman, they couldn’t hear his cues very well. The point of the humor, said Bergman, is to “help the audience get to know us.”

“We wanted to dispense with the hyper-intellectual tone that dominates classical music conversations. We wanted to take away that ivory tower quality.”

See, we don’t bite
“We also want to showcase individual members of the orchestra,” said Bergman. “These are interesting people and musicians.”

That’s one area where “Inside the Classics” departs from its predecessor, “Casual Classics,” which was launched in the 1990s by former Minnesota Orchestra Associate Conductor William Eddins.

As one of the players, Bergman says he has an advantage. “I know who’s funny and who has great stories. The other musicians trust me enough to come along.”

As if to demonstrate why trust is needed, this anonymous comment appeared a day after the event on the “Inside the Classics” Web page: “Have you forgotten you are a symphony orchestra and not a comedy troup [sic]? Sam should stick to his violin [sic] and give up the sophmoric [sic] humor.” 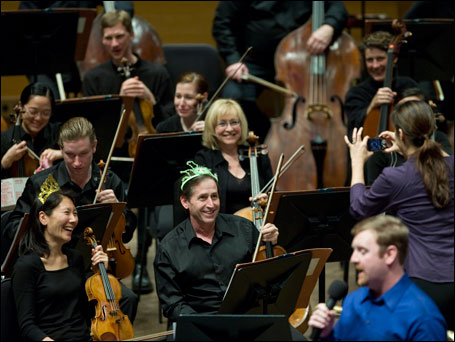 Photo by Greg Helgeson/Courtesy of the Minnesota Orchestra
“Classics” co-host Sam Bergman (foreground) manages to amuse orchestra members, including tiara-topped violinists Sarah Kwak and Roger Frisch, during a discussion of “The Firebird.”

Almost all of the rest of the comments have been positive, however. This one was posted later on Nov. 15: “I’ve been to hundreds of performances where the audience just sat there looking constipated until it was time to clap, and this was a delightful change.”

Because this season’s stage programs offer just six chances to engage the audience, Bergman considers the “Inside the Classics” website an equally important effort. Along with audience comments, it features video interviews, podcasts and a blog. “Orchestras are reluctant to embrace newness and change,” Bergman said. “This doesn’t ‘dumb down’ the music and gives audiences a new way to experience it.”

But seriously…
Not that “Inside the Classics” is all fun and games and interactivity. In their mid-November stage appearances, Bergman and Hicks used brief commentary and telling musical examples to place “The Firebird” at a pivot point between late 19th-century Romanticism and 20th-century Modernism. After the musical and historical context in part one of the program, they came back after intermission with a straight-up performance of Stravinsky’s 1919 “Firebird” Ballet Suite.

Just a week earlier at St. Paul’s Fitzgerald Theater, Ross did much the same thing with another Stravinsky ballet, “The Rite of Spring.” Ross in effect “performed” his book, which he describes as “the 20th century heard through its music.” Using musical illustrations — some stored on his laptop, some played live by the Turtle Island String Quartet — Ross read excerpts and responded to questions from American Public Media host Fred Child.

Both Ross and Bergman pointed out that the kind of “noise” Stravinsky introduced in these ballets grew louder as the century progressed. Some composers created music so thorny it alienated listeners and contributed to arguments that the classical tradition is irrelevant.

“Every week you see articles that claim classical music is dead or dying,” Bergman said.

Just looking out at the faces in Orchestra Hall, Bergman said he can tell the claims are not true. “But they lead to defensiveness,” he admitted.

Which is yet another reason he feels he has some explaining to do.