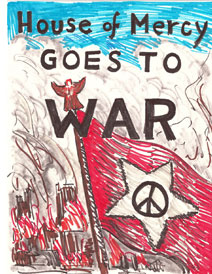 Last week’s pamphlet for services at St. Paul’s House of Mercy church included a handbill for this Sunday’s “House of Mercy Goes to War!” program, the gist of which was summed up like this: “Karl Barth (a theologian living in Germany during World War II) said any act of resistance must begin with a confession of our complicity. Come and confess and resist.”

Hardly the stereotypical stuff of anti-war bullhorns and ballast. To be sure, the Baptist-based church’s admission of complicity flies in the face of the prevailing anti-war clatter, epitomized by such smug bumper stickers that proclaim, “Don’t Blame Me, I Voted for [Blank].” Instead, the House of Mercy crew fully admits that as Americans, as human beings, as cogs in the machine, we are part of the whole and therefore responsible for what our governments and fellow men and women do in our name.

Taking responsibility
“You can’t say that George Bush isn’t our president, or that this isn’t our war,” says the Rev. Russell Rathbun, sitting in a post-service pew with House of Mercy bandleader Mike “Razz” Russell and the Rev. Debbie Blue. “But as ministers of a Christian church, we want to take all this quasi-Christian rhetoric that the administration and a whole group of people are tying up with this war rhetoric and stand up and say, ‘No. That’s not the way the story goes. We’re not part of that.'”

“We can make more demands of our leaders, and that’s about it,” says Russell.

“The theology that has motivated House of Mercy for a really long time isn’t this ‘we’re against’ thing,” says Blue. “So when it comes to war or violence, if we’re going to ever get anywhere, move out of that, the very first thing you need to recognize or somehow have revealed to you is that whatever’s causing it out there is also in you. We didn’t want to have an anti-war rally, because to be anti-anything is to say, ‘It’s apart from me, it’s not a part of me.’ “

Haven for the fallen-away
Just as its anti-anti-war stance isn’t protest-by-numbers, House of Mercy is unlike most churches that profess to be social change agents. Started in 1996 by Rathbun, Blue, the Rev. Mark Stenberg and a handful of friends, the church has become a favorite of fallen-away or never-were Christians. It has strong ties to the music and arts community of St. Paul, and it is often more remindful of a turn-of-the-century barn dance, or Pee Wee Herman’s Playhouse, than a church. That is, what it lacks in dogma it makes up for in humor, creativity and thought.

“The real Christian story is one about powerlessness and sacrifice, not about power and domination,” says Rathbun. “So we want to stand up and confess that we’re a part of this, and that we’re complicit in it, and we also want to confess that our allegiances aren’t to the government. They’re to something else — they’re to our god, and our values, and the way we live our lives. And we won’t give them up. We won’t let the government take precedent over those.”

The only guiding tenet to House of Mercy is love — for one another and God.

Old-timey music part of the draw
The 11-year-old community has been a catalyst for a thriving old-timey music scene in St. Paul whose oeuvre is equal parts punk rock and “Prairie Home Companion.” Two of the most memorable musical programs have been concerts by old-timey music legends Ralph Stanley and His Clinch Mountain Boys and Charlie Louvin of the Louvin Brothers. And great music is only part of the House of Mercy legacy.

“All of our friends kind of gave up on the church, because it didn’t have anything to do with what they were about,” Rathbun explained to me in 1999. “They grew up with this notion that you have to be good, and they were kind of saying, ‘I have no time for that. It’s guilt and shame. I can do that on my own; I don’t need to go to church for that.’ So we wanted to start a church that was not about that, but that said that you can be a person of faith and not turn your brain off.”

Much has happened since then. A holy war between entire nations has erupted, and the world is now engulfed by a divide-and-conquer religious madness that is diametrically counter to the House of Mercy way. As such, the folks behind the tiny church in Lowertown admit they sometimes feel like a calm voice in the wilderness.

“We’ve thought a lot about this theologically — whipping people up into a frenzy over ‘against something’ doesn’t seem like what the gospel is about,” says Blue. “Are we voices in the wilderness? It sure seems like it, because most religions are arranged that way — what’s good and what’s bad and how you’re good and they’re bad. So somehow the solution can’t be the same thing.”

“One thing we can do is confess our complicity, because that’s the beginning of transformation,” says Rathbun. “Let’s start there. Let the resistance start there. And if that catches on, then something’s happening.”

First, some purging
To get the party started, Sunday’s House of Mercy program will include old-timey songs of violence, blood, death and peace, as performed by local heroes Romantica, Roma di Luna, the Roe Family Singers, the House of Mercy Band and more. Songs will include “Battle Hymn of The Republic,” “I Ain’t Gonna Study War No More,” “Down by the Riverside,” and other time-honored and time-forgotten tunes that speak to the ravages and vagaries of war.

“We wanted to do something with all these old, really bad violent hymns. Somehow claim them, or I don’t know what,” says Rathbun.

“Purge them,” says Russell. “Sort of like dipping in your past. Like, ‘Holy crap! Who are these people? Oh, that was Grandpa Jim.’ “

“Yeah,” says Rathbun. “We don’t want to say that our grandparents or people who came before us were stupid and didn’t know what they were talking about. We want to honor where they were coming from, but also correct what we need to correct.”

Fourth concert during GOP convention
Sunday’s concert is the first of four such programs, the last of which will coincide with the Republican National Convention in September 2008.

“Downtown St. Paul is going to be cordoned off, and the Republicans have rented out every possible place,” says Rathbun. “They came to us and they wanted to rent out the parking lot, and we said, ‘No. We’ve got something going on.’ We really want this to be a bastion for everybody and anybody who wants to come.”

Come for what? Rathbun doesn’t finish the thought, but it says in the handbill that anybody in need of a little sanity in an insane world will find a hell of a lot of hope in the big oak room in downtown St. Paul, self-described in the weekly bulletin as, simply, “a pretty nice little church.”