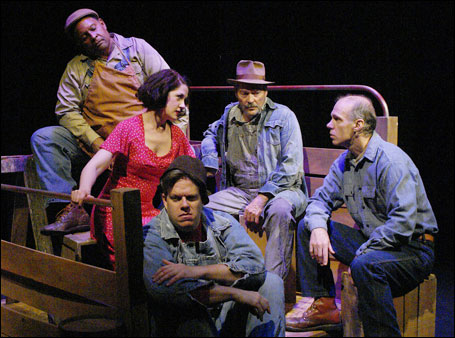 When I resigned as the Pioneer Press theater critic nearly 20 years ago, I told a colleague that one of the things I wouldn’t miss was reviewing Park Square Theatre in St. Paul.

That was a snooty, wiseacre thing to say. But after a decade of reviewing local theater, Park Square had come to represent my idea of a theater critic’s soul-crushing burden. It’s not the good shows or the bad shows that get you — it’s the mediocre ones, especially if the plays tend to be ones we all know.

All this is to explain a recent revelation. Last spring, after leaving the Pioneer Press for good and taking on some freelance reviewing gigs, I attended my first Park Square productions in two decades.

I called Richard Cook, the theater’s longtime artistic director, and expressed my admiration for the high-quality work they’re doing, both in terms of play selection, acting talent and production values. He was starting rehearsals for “Of Mice and Men,” the John Steinbeck play that opens Thursday, Nov. 29. Park Square has staged it a number of times, but this is the first one Cook has directed.

I didn’t mention that snotty remark of 20 years ago, but Cook was intrigued by the idea of someone coming back after all this time.

‘Different universe’
“It’s a big change,” he acknowledged when I mentioned then vs. now. “We’re operating in a different universe. It took awhile, and when you’re dealing with it up close, you can lose sight of how far things are evolving. Besides, we all have this nostalgic gene in us.”

I don’t think there’s another existing legit theater in St. Paul that’s older than Park Square, which was organized back in 1974 by a guy named Paul Mathey, a disabled veteran who financed the theater with his disability checks and some small grants. The theater took its name from the Park Square building in Lowertown, where its original performing venue was a tiny 88-seat space tucked away on the second floor near the then-headquarters of a scruffy outfit called Minnesota Public Radio.

During the time I covered the theater as a critic, Mathey moved on and was replaced by Cook, a doggedly determined Iowan who had joined the theater as a production designer and then learned that he also had to fund-raise to get paid.

When the Park Square building was remodeled, the theater was shoved into a basement nook — though there was room for an additional 50 seats — and then the company was kicked out of the building. They found space in the Jemne Building, a wonderful art-deco structure at the corner of St. Peter Street and Kellogg Boulevard. But because it’s a historic building, they had to construct a 140-seat theater in an auditorium without attaching anything to the walls.

That’s where I left them in 1988. Since then, the theater has evolved into a $1.4 million professional company, dumped its “classics only” pedigree, and — most importantly — moved a dozen years ago into its current, 350-seat stand-alone theater on West Seventh Place.

When I say my remarks about Park Square were unfairly “snooty” a generation back, it’s because — in retrospect — I remember intriguing moments in the theater’s old days. For instance, Steven Kent Lockwood, the longtime partner of Cook in their quest to create theater, gave a memorable, creepy performance in a production of “Marat/Sade” in the late 1970s; I still remember the off-handed, dismissive evil he silently displayed as he exited the stage at the close of the play.

On a weirder note, I remember a “noir” version of “The Glass Menagerie” there in the ’70s, with the actor playing Tom trying to imitate Humphrey Bogart. When he snarled, “I’ve got magic up my sleeve,” I thought — what, a magic gun? Tennessee Williams as Bogart: Who woulda thunk it?

St. Paul theaters seem to be characterized by dedicated long-timers who stick it out between thick and thin. There’s Lou Bellamy at Penumbra Theatre, Cook and Lockwood at Park Square and, a little more recently, Ron Peluso at History Theatre. They all hang in there, and we’re better for it.