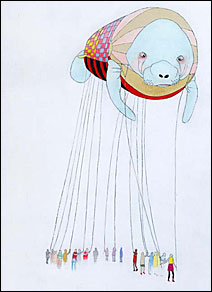 There was a day not too long ago when I almost lost my mind and soul at the same time. I imagined both looked like suffocating blowfish, transparent sacs so weak a single jolt could puncture them like a lethal fork to plastic film.

At the time, I was working for a corporate behemoth, where the manic chatter about clothes and “buttery” brand-name purses made a job at the Minneapolis Impound Lot (even the day after a snow emergency, mind you) seem like a more appealing alternative.

And that’s when I said it. The “dirty” word that made even me bristle. “They’re just so girly,” I told a friend about the women. Had I just said that? Then again, I called the guys there who talked about “partyin’ ” and clothes and such “duuuudes.” So what was the big deal?

This corporate-inspired equal-opportunity loathing brings me to this point: Is “girly” really such a dirty word? And why is it that, these days, certain modern art (“lowbrow,” or “pop surrealism,” if you will), can get tagged as “dark” or “provocative,” but artwork that has a similar but more feminine-inspired flair automatically gets the “girly” stamp?

‘Blatantly feminine’ art
Take, for example, local artist Jennifer Davis, and her surreal, sweet and evocative collages and acrylic paintings. They jump (dance, twirl, flip, frolic … girly things, you know) off the canvas like kaleidoscopic storybook dreams. The distorted imagery, the often bright, intense edges; they’re what our most vivid dreams look like in that single instant when we first wake up — the flash before that post-slumber blink causes the images to dim and vaporize. Lost in the ether of daylight.

“People always say my art’s ‘girly’,” says Davis, whose most recent work can be seen (starting Saturday) at Fox Tax Gallery in “These Elves Went to Art School,” and currently at the Foster Gallery at the University of Wisconsin-Eau Claire in “Rome is Burning: The New School,” a show featuring mostly men doing rock-‘n’-roll-inspired artwork. Even more than three decades since its inception, lowbrow art is primarily a dude’s domain.

“I remember years ago complaining to someone at [the now shuttered] Ox-Op Gallery that they never had any women there,” Davis says. “It’s so cool to be in a show with my heroes. But I know we’re very different… I like to think my artwork is blatantly feminine. And I embrace that,” she says.

And on being considered “girly” among the surrealists? “I’m not a girl,” Davis says. “I am a woman. And I want to be treated as a woman. But I’m also not my art.” 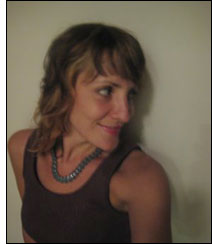 Sweet dreams and puppy-dog tales
To be sure, Davis’ art is nostalgic. The characters in her paintings look like they’re inspired from childhood fantasies (humanoid birds that carry clutches; see-through horses the color of bubblegum; sea lions with cheeks decorated in cake-y rouge). But often the characters are just pop-in visitors in a cryptic world of allegories and dark fairy tales.

And of course Davis’ work sticks out like a cotton-candy-wrapped sore thumb among the “Rome is Burning” artworks. Even among the other female artists in the show (there only are about five among the 36 or so artists), Davis’ piece is more delightful than dark.

“I’m definitely on the outer fringes of that movement,” Davis says. “Even the other women in the show like for example, Angie Mason, had like a really more gory-looking picture. Not necessarily ‘feminine.’ But what is feminine anyway? I don’t even know.”

I’m not sure either, anymore. But if it doesn’t involve talking about clothes or $5,000 purses, I’m all in. With lavender-scented pink bells on.

So what if the art is girly? Her work is surreal