Hungarian Erno Rubik reportedly got his inspiration for the cube that made him famous by staring into the Danube River one day in Budapest. Somehow, the interaction of the water and the pebbles gave him the idea for the mechanics behind the Rubik’s Cube. That was in 1974. By the early ’80s, the Cube took the world by storm.

Now comes the St. Paul Cube … not quite the engineering feat of its ancestor, but a stroke of promotional genius nonetheless.

The St. Paul Cube’s creator, Andrew Hine, is an engineer for 3M Co. and a board member of Historic St. Paul, a group working behind the scenes on city preservation efforts. Hine’s inspiration also was found in Europe — specifically, in his aunt’s house in Norfolk, England, in 2006. The city Hine’s aunt lives in started its own cube craze, too — the Norwich Cube. Hine knew then and there that his hometown must be cubed.

And so it was.

“It’s got tactility. You can hold it in your hands, look at it, play with it,” Hine says. “Even if you’re not interested in history, it will have an impact on you, make you think about St. Paul.”

City history side by side
The St. Paul Cube features nine historically significant sites, including the Landmark Center, the Hausler House (an example of the Prairie School of architecture), the Swedenborgian Church, Como Park Conservatory and the downtown riverfront. “We purposefully left off the Cathedral and the Capitol because everybody sees those,” Hine says.

The images on the cube (Hine shot many of the photos) illustrate a nod to various aspects of St. Paul’s history, including its politics, environment, and immigrant history.

“We want people to value historic places and think about constructing buildings that will last into the future, instead of building disposable structures that we plan to knock down in 20 years.” 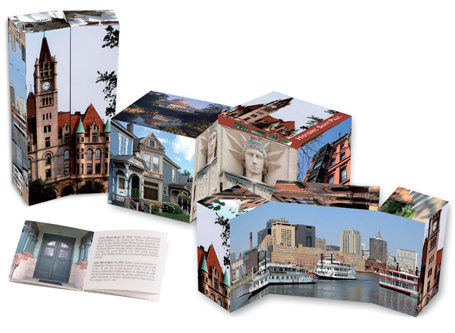 Historic St. Paul manufactured 5,000 cubes, and Hine would like everyone to buy one. “It’s a perfect souvenir … a great gift … it appeals to children!” he says.

The cubes cost $10 each and are available at the group’s website through PayPal. For more information, send an email to info@historicsaintpaul.org, or call (651) 222-3049. Proceeds from the St. Paul Cube go toward HSP’s preservation projects and activities.

Mayor already has bought 100 cubes
St. Paul Mayor Chris Coleman is a fan. He bought 100 of the cubes, and even packed several of them to give as gifts on his recent cultural exchange trip to Neuss, Germany, one of St. Paul’s sister cities. “We felt that it was a great idea to market St. Paul as a destination, and to celebrate our long record as a leader in historic preservation,” Says Coleman spokesman Bob Hume.

The St. Paul Cube is more of an objet d’art than it is a puzzle. It’s thought-provoking and educational, but thankfully, not a mental challenge by any stretch.