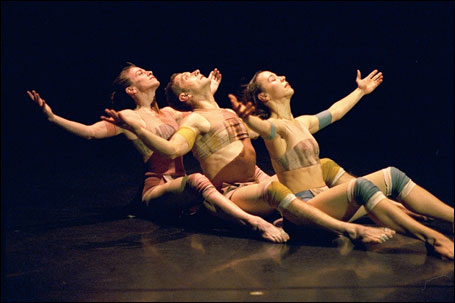 Photo by Jeffrey Austin
Choreographer Wayne Fricke’s “Blessing of the Earth” will be one of the pieces performed this weekend at Zenon’s program at the Guthrie.

As a fledgling dance writer, I cut my teeth on Zenon Dance Company. The metaphor is apt because for 25 years, the jazz- and modern-dance repertory troupe—under the laser-beam direction of Linda Z. Andrews—has been whetting and sharpening the local appetite for concert dance, chiefly in two ways.

One: By maintaining rigorous standards for performance. While each dancer has a singular personality as a performer, all set a gold standard for technical virtuosity and artistic integrity.

Two: Andrews has made it her mission to build a diverse repertory by commissioning (to date) more than 50 choreographers to create new work for Zenon. With annual support from the Jerome Foundation, she has been able to hire many “emerging” choreographers. Early in their careers, such now-famous choreographers as Bill T. Jones, Bebe Miller, David Dorfman and Doug Varone made work for Zenon.

More recently, Andrews has commissioned New York rising stars Tere O’Connor, Keely Garfield, Bill Young, Colleen Thomas and Sean Curran to create dances for her troupe. And she has given work to local choreographers from Ranee Ramaswamy (Ragamala Music and Dance Theater) to Myron Johnson (Ballet of the Dolls).

Then and now
Some 20 years ago, I was taking dance classes on an upper floor of the Wyman Building in downtown Minneapolis, where Andrews was teaching and shaping her two new companies: Rezone Dancers (modern dance) and Just Jazz Dancers, the precursors to Zenon. Andrews still runs her school, which offers classes for professionals and enthusiasts alike (from ballet and modern dance to hip-hop and Afro-modern). The school brings in up to half of Zenon’s $500,000 annual revenue; the McKnight Foundation is another source of annual operating support.

So in the last couple of months, Andrews and I have chatted several times about those days, and these days, as the company prepares to open its 25th season with a repertory concert this weekend at the Guthrie Theater. On the heels of that concert is a new holiday show choreographed by Curran, “The Nutcracker According to Mother Goose.”

How on earth did she select dances for the Guthrie concert? “Over the years the repertory has become so rich and vibrant that I have too many wonderful pieces to choose from,” Andrews says. “So I’m really revisiting my roots.” Miller’s “Sanctuary” is on the program, a timeless portrait of support danced by the company’s five women. Audible breaths and vocalizations mingle with fast heavy movements and moments of rest in the work, which Andrews calls “spiritual and well-crafted.” Miller was in town recently and reportedly updated the work.