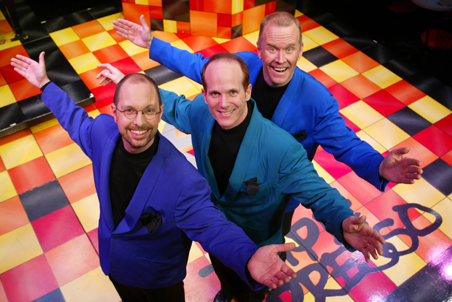 After a Twin Cities run of a mere 12 years, “Triple Espresso” is closing in 2008, probably within the next few months. But Triple Espresso Inc., the parent company, will continue to operate.

You couldn’t write a more improbable theater success story. Back in 1996, three local entertainers decided to cobble together a show for a performance in the fellowship hall of a suburban Presbyterian church. Each contributed some shtick.

Michael Pearce Donley could do a dead-on impersonation of an unctuous lounge-act pianist. Bill Arnold had a magic act where he was deliberately inept and deadpan defensive about it. Bob Stromberg could do a madcap vaudeville clown in the grand tradition of Red Skelton.

The performance they gave at Christ Presbyterian Church in Edina was seen by Bill Partlan, who was struggling to keep the Cricket Theatre afloat after it had moved into the renovated Music Box Theatre on Nicollet Avenue in downtown Minneapolis, just a block from the convention center. After some tweaks designed to frame the show with a minor plot, Partlan added “Triple Espresso” as the capper to the Cricket’s 1996 season — which, as it turned out, was the finale for the Cricket before it folded.

But “Triple Espresso” took root in the Music Box and continued on and on. And there’s more.

The idea that launched the franchise
Enter Dennis Babcock, a longtime theater producer and marketing wizard with roots that go back to the early decades of the Guthrie Theater (he’s also married to KARE-TV news anchor Diana Pierce). Coming on as the show’s executive producer, Babcock hit on the idea of putting “Triple Espresso” into small-house venues in cities around the country, where it would be marketed as a “bonus” to existing theatrical subscription seasons of big road-show productions like “Rent” or “Sound of Music.”

This gave Babcock access to the community’s subscription audience base, along with its publicity program, and it provided instant audiences while the show generated word-of-mouth interest. Touring shows would come and go, but “Triple Espresso” would hang on for months, or even years. In San Diego, one of the first cities the show visited, “Triple Espresso” will have been in residence for 12 years when it closes in February.

40 cities, six nations later
Thus far, the show has played in 40 U.S. Cities — it played for 68 weeks in Des Moines, for example — and in six countries. It has been translated into two foreign languages — Flemish and German — and a Danish translation was prepared for a production that never surfaced in Copenhagen for reasons that are too complicated to discuss, Babcock says.

From their little six-employee office at the Music Box, Triple Espresso Inc. has managed to sell $42 million in tickets — $14.5 million in the Twin Cities alone — and 1.6 million people have seen the show, even though it’s always performed in small theaters of fewer than 400 seats.

To date in the Twin Cities, the show has drawn 600,000 attendees, many of them repeat customers who never seem to tire of the clean, gag-packed variety-hall comedy. To handle all this and keep the product consistent, Partlan has coached 10 actors for each of the roles — 30 in all.

So why is it closing here?

“It’s purely an economic decision,” Babcock said, explaining that the local show was kept running year-round “for continuity reasons” and that income losses during the summer slumps were being made up by holiday performances and by income from productions running in other cities.

The original cast seldom appears in the same performance, Babcock added. “Of the originals, Mike (Donley) still performs the most,” Babcock said. “Bill Arnold appears occasionally and Bob (Stromberg) is seldom in it.”

The decision to take down the San Diego production was announced late in 2006, but a surge in ticket sales — probably the result of nostalgia — kept the show open in 2007, Babcock said. Recently, however, advertisements in San Diego announced that “Triple Espresso” would close on Feb. 17, 2008 — “And this time we’re not kidding!” the ads say.

That’s show biz
No date has been set for the Twin Cities closing. “But it will be sometime sooner rather than later,” Babcock said.

Nonetheless, the show will go on. It’s scheduled to play in Atlanta and Milwaukee next year, and a five-state regional tour — with stops in St. Cloud and Red Wing — is scheduled for next fall. There’s also talk of taking the show to Pittsburgh, Phoenix, and Kansas City next year. And to Korea, of all places.

“We’ll still maintain our offices at the Music Box and rent the theater out to other shows,” Babcock said. “It’s a nice 438-seat theater and we’re confident that there will be plenty to fill it up.”

Shows like “Triple Espresso” are examples of the mystery of show business. When it caught on, Babcock said everyone counted their blessings and rode the wave. “But always, these things have a season and they come to an end,” he said. “And then we just say — thanks.”