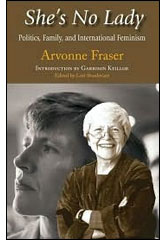 By 9:30 a.m., I’ve dressed and fed my kids, run a load of diapers down to the washer, paid bills, fed the cats, set a package of finished work out for the courier, checked in with another client via email, delivered my eldest to preschool and returned home to write on the laptop while my toddler stacks blocks nearby.

I am one of the new breed of stay-at-home-while-self-employed “having-it-all” modern, multitasking mothers and workers, and I thought I was pretty dang productive, until I read Arvonne Fraser’s memoir, “She’s No Lady: Politics, Family, and International Feminism” (Nodin Press, 2007).

What Fraser accomplished in an average morning in the 1950s and 1960s boggles my mind. She edited the state Democratic-Farmer-Labor newsletter, served as second ward DFL secretary, actively managed her husband Don’s campaigns for Congress and mayor, supported women’s and civil rights causes, and, oh yes, took care of her six children.

Before the Frasers’ youngest was out of the house, Arvonne also helped Jimmy Carter’s administration hire qualified women and headed the U.S. office of Women in Development, an organization that improved life for women and girls in developing countries, and today, at 82, she’s still working on women’s issues through the Humphrey Institute.

In other words, she helped change the world. Now that’s productivity.

Today’s moms have it harder, she says
“Oh, I think women and mothers today have a harder time, actually,” she says from her longtime home in southeast Minneapolis. “Back then, I could hire affordable housekeeping help and child care. Mothers could accomplish more, and it was very common to be an active volunteer in the community.

“Today, people have so little time. They don’t have help, they don’t have time; they are working long hours and commuting. And it’s much harder in other ways. So many families don’t have affordable health care or child care. The schools and libraries are suffering. There isn’t the community support or the government support for families that existed when my children were young. Even the tax credit is smaller for families with children.”

Fraser’s six decades in politics have helped bring about sweeping social change, improving women’s lives in large and small ways. In her book, she mentions the time her bank refused to let her withdraw money she’d deposited before her marriage without her husband’s permission, and says her doctor required her husband’s approval when she asked, at age 37, after six children, to have her tubes tied.

She is happy today’s women can take basic freedoms for granted. “I enjoyed the right to vote and use birth control, and took those things for granted, even though I knew previous generations had fought hard for them,” she says.

Politicians’ priorities disappointing
She’s more critical of the regressive change she has observed in politics. While the Frasers reared their family on a limited budget, living in a modest city neighborhood (Arvonne’s work in the early years was unpaid), she observes that today’s politicians come from wealth and work harder at generating money than at serving constituents. “It’s terrible. It’s a waste of time and energy. Everyone in politics spends all of their time fundraising, and nothing is getting done.”

Fraser finds the political landscape changed in other ways, as well. She and Don are not “churchgoing types,” and that wasn’t an issue a half century ago. Today, candidates fight to out-pray each other. “The Republicans have fabricated this myth that we are such a religious society,” she scoffs. “Well, the backlash against that, and so much else, has already begun.”

Fraser is eagerly anticipating the 2008 elections, hoping for change on a local level. “We’re a rich state, and we’d better start acting like one, otherwise more bridges will be falling down,” she says. Of course she’s following the presidential candidates closely. Her favorite? “I like Obama.”

“I know you’re wondering why I’m not saying Hillary. I know Hillary and I like her a lot, and I do think we’re ready for a female president. But I think we need greater change in this country, instead of Bush-Clinton-Bush-Clinton. And you know Bill is just dying to get back into the White House. We really need to move beyond the partisanship to accomplish critical change and restore our position in the world,” she says. “I think Obama’s most capable of bringing that change about, partly because he can work with people on both sides. Of course, if Hillary gets the nomination, I’ll throw my support behind her and do everything I can to help.”

And that’s no small offer.

Herstory: Arvonne Fraser reflects on a life of advocacy