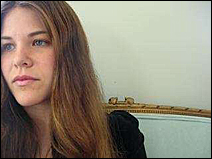 The Twin Cities music scene is propped up by an army of young songwriters with old souls — Brianna Lane, Jonathan Delehanty, Jenny Dalton, Dragich, Joanna James, Stook!, Meg Ashling, Jennifer Markey — to name a few. One of the most arresting is Alison Rae, a 28-year-old Shoreview native whose voice and songs come at you with all the power and hype of a falling snowflake. No coincidence, given the setting in which her debut CD “Alison Rae” was crafted.

“My husband and I moved in with my grandparents on their hobby farm last year,” she says. “We have chickens, hens, a huge garden and a barn. It just kind of broke my heart when everyone started talking about putting my grandfather in assisted living, so we moved in to help out.

“I had been working as a nanny, and I took a year off and just wrote. I was writing full time from November until August, when we recorded the CD. I usually sit on this sofa and look out the window, so there’s a lot of imagery of the spring, because that’s when a lot of the stuff started coming out. So there’s a lot of roses and birds, because I was just sitting there watching life pass me out the window.”

A feeling of communal grace
That tranquility translates. The three times I’ve heard Rae in concert, her talent has instantly hushed the room — not only because of her obvious gift of a voice that lilts effortlessly and emotively, but also the pervasive feeling of communal grace that infects the crowd. What’s more, there is a lived-in quality to her songs that suggests she has had her heart broken (“Listen Boy” and “December” belong on any melancholy mix tape worth its scars) and there’s also a defiant sweetness that attests to the healing power of post-heartbreak epiphany.

You can listen to her sing here. Or you can check her out tonight (Dec. 14) at her CD release party at Bryant-Lake Bowl. (Details below.)

“There’s been some real heartbreak in my life, and in people around me,” she says. “I lived in Nashville for a couple of years before I met my husband and moved home. It was a dark time for me, and I just wanted to rise above it, and the dark times make love now so much brighter.”

Another component to Rae’s quiet strength is a palpable, though not overt, sense of spirituality. She was reared in a Christian home and has “wandered away and back again in a new way.” She says her faith in God helped her through a miscarriage earlier this year, and guided her in the writing of “Lullaby,” a song of uncommon empathy about an infant she cared for as a nanny.

“She had a really rare brain tumor, and she passed a month before her second birthday,” says Rae. “Her mother and I basically cared for her. I wrote it in the car after I found out she died. Her mother is a dancer, and that line ‘your mother is dancing now around the room’ and ‘I’ll sing my song for you until the night is through,’ is because her life inspired us to live better. For whatever reason, God only put her here for a little bit of time, but she made us want to live for her.”

Like much of “Alison Rae,” “Lullaby” clips along at a pace that would frustrate many attention-deficit listeners. Her phrases are unfurled, not rushed, and her arrangements are about as busy as a horse-and-buggy. That is, she’s in no hurry. She’s slow. As a result, she is nothing if not a calming influence; inspiring the listener as she does to gaze out the window and stop to watch the snowflakes.

“I’m content; I’m kind of a homebody,” she concludes with a laugh. “I’m content to be … I’m content just to be. I just want to sing. I just hope me singing changes the world in some small way. I hope it makes it better.”