Out on Medicine Lake in Plymouth, it doesn’t matter if you’re dancing, quivering or using your own exhalations to save your nose. Frozen tears and snot turn everyone out here into a cousin of Yukon Cornelius, that dude from “Rudolph the Red-Nosed Reindeer” who carried his ax and a peppermint preoccupation all the way to Antarctica. 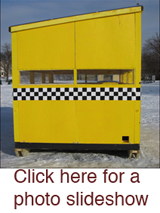 It was never supposed to be like this. A jet fuselage adorns an austere landscape. Crash survivors search for rabbit tracks amid ice cracks. Burlesque dancers shimmy their frozen stuff underneath layers of fleece and wool, their long lashes turning into bedazzled icicle curtains.

Anyway, for Art Shanty Projects creator Peter Haakon Thompson, a photographer and public artist, the Fluxus-inspired houses on Medicine Lake originally were supposed to be an escape instead of an ephemeral glacial neighborhood of artists and art lovers alike.

“I originally saw myself hanging out on the ice,” Haakon Thompson says of the first art shanty he created in 2004. “It was going to be a fort for me and my friends, but it’s obviously way more than that.”

“The thing I think that’s really cool about it now is it’s this thing that expands the idea of what art can be,” Haakon Thompson says.

Because of their public location, and because the artists themselves are participating outside the confines and rules of a gallery, the shanties are uniquely interactive. Artists and visitors are equal participants in the art and numerous events.

In fact, every piece in the project is an extension of the lake and its environs; everything is inspired by — and homage to — an ice-age culture and the bragging rights it inspires. And if you think this weekend’s opener sounds like it could permanently solidify bone marrow, remember this, coldy cats: The opening day of the Art Shanty Projects in 2005 saw temps hover at minus-20. The tundra-like environs is part of the charm; it’s what makes it uniquely Minnesota art.

“People come out here for the first time, and they ask me what this all is,” Haakon Thompson says. “And I tell them that it’s art. And at first I think they are sort of amazed. But then they start to see it like that. And I think that’s really cool.”

I checked out some of the shanties on Thursday, when most were still skeletons of what they will become for Saturday’s opener. But even as shells, I can safely say I am most excited about:

• The “elegant” Western School for Anthropological Research, an old-timey haven decked out in dark wood.

• The Black Box Theatre Shanty, which will host a series of 15-minute performances every weekend.

• The Survival Shanty, a conceptual piece that’s equal parts performance space and sculpture. It’s made to look like the tail end of a jet that’s crashed into infinity. The artists will be on hand over the weekend to tell their daily near-death tales. They live here, you see. And they hunt wabbits.

“You come out here, and you really become part of this community just by participating,” Haakon Thompson says. “I think by just calling it art, it changes things. And I think that’s the first step.”

(Check MinnPost next week for more about the art shanties and numerous weekend happenings on Medicine Lake.)