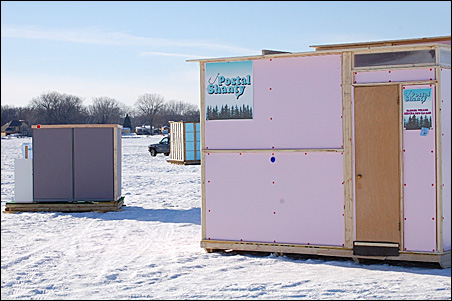 Photo by James Larkin
The Postal Shanty puts an artistic zip on the traditional P.O. box.

If the Art Shanty Projects is a prefab city on a rock-hard lake, then the gregarious Peter Haakon Thompson is its de facto mayor.

After all, he and Soap Factory installation manager/city planner David Pitman created this tiny town on Medicine Lake.

The sun is beaming, yet its hard work is lost in this frost zone. The temperature is minus-9, but the wind chill feels like minus-99. It’s so cold the snow has no give, even beneath big-foot boots and big-wheel pick-up trucks.

There’s something otherworldly about this art village. But it’s not the sci-fi chill or the feeling that somebody could build snow stilts out of this stuff and trundle across the tundra. It’s otherworldly because of the imagination and hope emanating from these frosty art forms of plywood and metal. No signs of snootiness here. 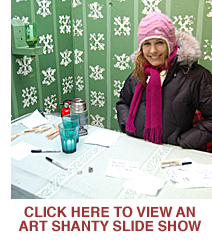 The stranded theme
Inside the “Survival Shanty,” a jet fuselage fashioned from plywood, artists breathe the eye-burning, road-kill odor of propane while listening on a Talkboy to the only piece of music that survived the plane crash. The cassette plays the theme from “Halloween” and that one 7-Eleven “new-age” song by Enigma. You can see and hear more about the Survival Shanty here.

The pop-cult remains prompt conversation among the shanty’s inhabitants and visitors. Spontaneous discussions tend to ignite like fires in shanty-land, making it easy to become smitten with strangers and their innovations.

“The idea of being stranded outside of civilization is a popular theme right now, with (TV) shows like ‘Lost’ and ‘Survivor,’ ” says Peter McClarnan, one of the Survival Shanty artists. “I like the idea of sort of addressing or mocking that anxiety.”

On Saturdays, when a handful of daily events take place out here, “Survivor Shanty” visitors are outfitted with a map and compass, which they use to navigate the different performances by the crash survivors. “It’s all about looking at how they deal with the hopelessness of their situation,” McClarnan says.

Hopelessness and isolation are hard to find out here, even with proper tundra tools. Yet that’s the whole point of the Art Shanty Projects: to inspire creativity and connectedness; to make art accessible. “I like the idea that maybe people could create something like this in other places, maybe even on other lakes here,” Haakon Thompson says. “I like the idea of it becoming this bigger thing, like there would be little franchises all over.” 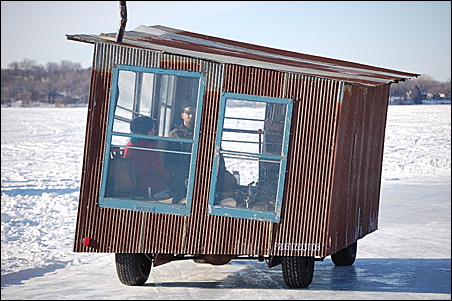 Photo by James Larkin
The Mobile Home Shanty is inspired by Vikings and shotgun shacks.

Rolling, rolling, rolling
The “Mobile Home Shanty” rolls by on old truck wheels, and an occupant flashes a peace sign from a crooked window. He swings open the deliberately askew door of the mobile shotgun shack and invites everyone in. Corrugated metal festoons its exterior. White puffs dance from the roof’s smoke stack.

Inside, an old wood stove turns it into a mini sauna. To get the shanty moving, riders in Gore-Tex-clad legs crank bicycle pedals that emerge from the wood floor. Artist Julia Kouneski uses a lever decorated with a red pool ball to steer the contraption. The off-kilter, Civil War-era house floats along the ice trail like a ghost.

The team of artists erected a drive shaft from donated materials, and installed a front axle from a 1976 truck to make it mobile. “We really liked the idea of creating something that moved,” Kouneski says. “Kind of like the whole idea of Vikings and invading.”

There’s no doubt that shanties like the “Mobile Home Shanty,” the “Survival Shanty,” Giant Robot,” “Black Box Theatre Shanty,” “Green Easy” and the “Abandoned Antarctic Shanty” (to name a few of the 20 or so shanties) are artful sculptures in and of themselves. But they also invite visitors to leave their mark. In the “Abandoned Antarctic Shanty,” for example, every visitor is required to leave something behind, including, say, a dirty guacamole napkin.

Some shanties decorating the lake aren’t arty: The “Postal Shanty,” for example, is a post office for this artists’ municipality. And the “Knitting Shanty” is a meeting spot for crafters and stitch ‘n’ bitch events. But these places don’t have to be artful to be equal participants. Just the interaction these shanties inspire between artists and viewers makes them unusual art forms.

Visitors aren’t simply spectators of the art and numerous weekend events. They become the creators. Whether they’re inscribing green solutions on cloth napkins in Nicole Tollefson’s “Green Easy,” singing karaoke under a waning moon in the “Norae Shanty,” or hanging out in Hizzoner Hankaan Thompson’s office-shanty, where he brews tea on a propane heater for visitors, viewers are challenged to find inspiration in bleakness, connections in the austerity of winter and warmth amid the numbness.