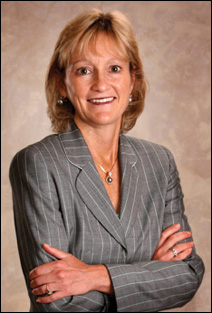 Courtesy of McGraw-Hill
Rebecca Shambaugh, author of “It’s Not a Glass Ceiling, It’s a Sticky Floor.”

If you’re a woman determined to pad your paycheck with a promotion, here’s good news to start your year. Wages of women in their 20s are running neck and neck with men of the same age in some U.S. cities, including Minneapolis and St. Paul, according to pooled data from the American Community Surveys in 2005 and 2006, said Trent Alexander, a research associate at the University of Minnesota’s Minnesota Population Center.

While pay for women in their 30s and older still lags behind pay for male contemporaries, the census data are a good sign for women. So is the success rate of women who finish a Washington, D.C.-based leadership program, said Rebecca Shambaugh, president and CEO of Shambaugh Leadership, a company she created. Four in five graduates of the program, she claims, are promoted within less than a year.

Aspiring women’s biggest problem isn’t an inability to climb the ladder once they’re on the way, Shambaugh said. It’s getting their feet off the ground.

In her new book, “It’s Not a Glass Ceiling, It’s a Sticky Floor” (McGraw-Hill Professional), she blames predominantly female habits we may have learned in kindergarten for keeping women stuck.

For starters: people-pleasing, perfectionism and keeping our heads down.

Pleasers vs. the big picture
“We’re pleasers,” she said of women. “We’re trying to be the best at everything.” But being a worker bee and pursuing straight A’s doesn’t always translate to a work environment, she said. Instead, “It limits perspective. We’re so involved in pleasing people that we may not see the big picture.”

She suggests women ask instead what’s good-enough. “Quite frankly, doing a good job isn’t everything,” she said. “It’s also about building relationships, knowing where you bring the greatest value and making sure people know about you.” 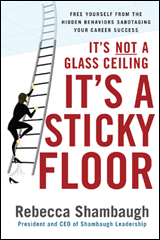 Hmm. Is the self-promotion process starting to sound not so nice? Likely so for many people, according to a study spearheaded by Linda Babcock, an economics professor at Carnegie Mellon University. The 2005 study showed that both men and women were more likely to subtly penalize women who asked for more money and to perceive them as “less nice” than their peers.

Along with old inhibitions, that mindset has to go, said Shambaugh, whose book lays out seven tactics for getting unstuck. The seventh is asking for what you want. “A promotion — there’s nothing wrong with that,” she said. “People sometimes won’t know if you’re interested if you don’t tell them. Sometimes women feel if they over-promote themselves, they’re too overpowering or come off as that b—-, or whatever.”

Balance, boundaries are better ‘b-words’
She offers more positive b-words that help women attain success. One is balance. Rather than operating in total overdrive and self-marketing, she said, a flip side is important: marketing other people, too.

She suggests creating a personal board of directors, a group of women for support and help with goal-setting. “Women always collaborate, usually in friendships,” she said, but rarely do they work together to foster career success. “It can open up an opportunity for frankness, so they will straight-talk issues with you.”

Another key word is boundaries. “We really have to set some boundaries for ourselves,” she said. “Not only to nurture others but to step back and say you are your own career and the only one who can create your destiny. You can’t expect other people to take charge of that.”