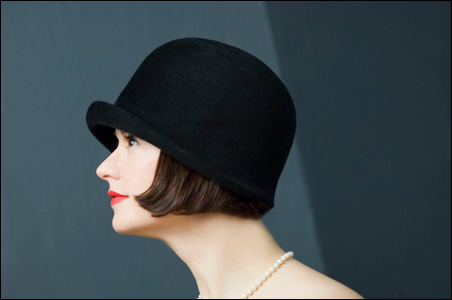 One of the perks of living in the same town for a while is finding artists you enjoy and following them around. I’m not sure when I heard Christine Rosholtfor the first time, but it was probably soon after her local debut as a vocalist at La Bodega in October 2002.

Since then, I’ve seen her several times. In an especially memorable show in February 2005 at Macalester College, she sang jazz arrangements of works by Shakespeare while wearing a ruff.

Her theater background (she spent two years with the Children’s Theatre Company and has performed at the Loring Playhouse and with Theatre de la Jeune Lune) serves her well; she’s confident on stage, knows how to move and has impeccable diction. Through the years, her beautiful voice has become warmer and richer. She can do sensuous and sassy, and she can swing. Hear her sing here.

Rosholt (pronounced “ross-holt”) released a demo CD of four songs in 2003 and her first full-length CD, “Detour Ahead,” in 2006; the latter earned a Minnesota Music Awards nomination for Jazz Recording of the Year. On Jan. 30 and 31, she will record a new CD at the Dakota Jazz Club.

Perhaps the hardest-working jazz vocalist in the Twin Cities, with many gigs each month in all kinds of venues, Rosholt knows how to pick band members. Her Dakota recording will feature her regular trio of Tanner Taylor on piano, Graydon Peterson on bass, and Jay Epstein on drums, plus recent McKnight Artist Fellowship Award winner and beloved Twin Cities saxophonist/flutist/clarinetist Dave Karr.

I spoke with Rosholt Wednesday about what to expect at next week’s recording sessions.

MinnPost: What songs will you perform and record?

Christine Rosholt: We’ll do a mix of lesser-known and more common tunes. “Cheek to Cheek,” “If I Were a Bell,” “Down with Love,” “Tea for Two.” “Estate” by Bruno Martino, with lyrics by Susannah McCorkle. Bob Dorough’s “Devil May Care.” He wrote the “Schoolhouse Rock” music. The CD will have 16 songs, most from the 1930s and ’40s.

MP: How did you choose the songs?

CR: It’s hard because there are so many good ones, so I just try to mix it up — upbeat songs, some with a Latin feel, one or two in waltz time. Fun songs and serious ones, sexy songs, ballads. Not too many in the same key. I asked the band to tell me their favorites and took that into consideration.

MP: So in a time when everyone is buying singles from iTunes, you’re still treating this as an album?

CR: Yes, it will be something you can listen to all the way through.

MP: Who does your arranging?

CR: All of us. I’ve been playing with these guys for years — Jay since the beginning, Graydon since our first gig together at Nochee’s [now Harry’s] on New Year’s Eve 2004, Tanner since about 2003, Dave for about two years. Our ways of doing the songs have just evolved.

MP: After two nights in the club, will you follow up with studio work?

CR: I hope we won’t have to. Steve Wiese from Creation Audio is our recording engineer, and he’s so good I hope it can all be live. I don’t really like going into the studio. You’re alone in a little room and it’s so cold. I hate the term “people person” but I guess that’s what I am. I prefer an audience.

MP: Are you still happy with your previous CD, “Detour Ahead”?

CR: Yes and no. It was arduous for me, and I tweaked it too much. Also, I sing a lot of those songs lower now, so sometimes when I hear it, it sounds weird. But the other night I was driving home from a gig in Wisconsin and listening to Maryann’s show [“The Jazz Connection with Maryann Sullivan” on Minnesota Public Radio] and she played “Early Autumn” and I thought, “Oh my god, that’s pretty good.”

MP: When you’re not performing, what local singers do you like to hear live?

CR: Carole Martin. I love Lucia [Newell]. And Connie [Evingson]. I’m excited for her new CD with Dave Frishberg. … We have such a good scene here. I was in Chicago recently, and there wasn’t a lot going on.

Chris Bates et al: Bassist Bates is another artist I follow around. He emailed this tantalizing description for an upcoming show at the 331 Club: “Improvised music from me, Wendy Ultan, Anthony Poretti and Stefan Kac plus 2 other bands.” (This is the club that will host the First Annual Drunken Spelling Bee on Feb. 2. Sounds like a fun place.) 331 Club, 10 p.m. Friday, Jan. 25 ($3).

Hugh Masekela and the Chissa All-Stars: The South African superstar is much more than “Grazing in the Grass.” Expect a spicy stew of jazz, funk, and Afro-beat. He’s bringing singers. The Dakota, 7 p.m. and 9 p.m. Tuesday, Jan. 29 ($50 and $35).

Christine Rosholt to record CD at the Dakota