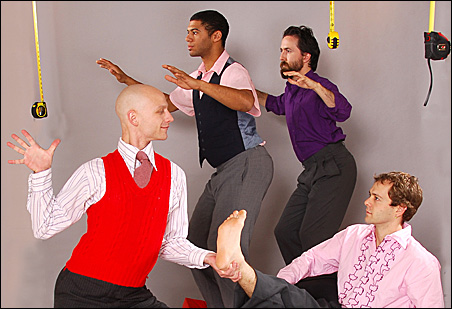 In 1975, British avant-garde filmmaker and theorist Laura Mulvey published an essay titled “Visual Pleasure and Narrative Cinema,” in which she introduced the concept of the “male gaze.”

Academia, art and popular culture have not been the same since.

Legions of responses, rebuttals and revisions followed. Mulvey’s argument, based in feminist psychoanalysis, was that popular cinema produces — and reproduces in viewers — images of women as objects of (and objects controlled by) male desire.

How the “male gaze” (straight or gay) operates in all media and cultural avenues (from YouTube to print advertising to reality TV) is now freely discussed.

So is the growing presence of the “female gaze.” Which is what has young, white, straight dancer Cade Holmseth worked up enough to choreograph the male quartet “Le Regard Feminin: Quatro Uomi” (The Female Gaze: Four Men) at Red Eye Theater in Minneapolis this coming weekend (Jan. 17-20).

Holmseth says the female gaze isn’t merely the objectifying, controlling male gaze in reverse. Her gaze has resulted in the metrosexual movement. “Suddenly, the question of masculinity is in the air and only the man who is not afraid to wear pink and cry in public is the strongest of the pack,” he writes in a statement about “Le Regard Feminin.”

“I grew up in Mankato. The town is really masculine. Even the women act tough. Everybody drinks, and no one shows their emotions,” Holmseth says. But since coming to the Twin Cities and earning his BFA in dance at the University of Minnesota, “I’ve been under a kind of scrutiny I wasn’t in the past. All of this inspired the idea for this piece.”

Conflicting messages
His personal experiences with women, girlfriends or otherwise (whom he declines to name), have led to “absolute confusion,” he says with exasperation. “I’m always getting conflicting messages on how to behave. I’m finding a lack of ability to even be what I’d like to be: strong and supportive of women as I have been my whole life.”

Holmseth also has been influenced by his work with Stuart Pimsler Dance & Theater, where Pimsler regularly choreographs hilarious pieces about male vulnerability. Remember the trio in “The Ends of Love,” in which a befuddled Holmseth, naïve and outraged Jesse Walker, and hurt and childlike Pimsler console one another after the women crush their fragile egos? (That piece, by the way, will be reprised March 28-30 at the Ritz Theater.)

“Le Regard Feminin: Quatro Uomi,” which Holmseth is self-producing out of his own pocket, includes himself and three men “of similar Midwestern backgrounds, but who have different viewpoints on the topic,” he says. “The piece really focuses on how men act differently when women are watching.”

Holmseth has invited “all of my friends from Mankato” to “Le Regard Feminin: Quatro Uomi.” And he’s hoping to draw a lot of non-dance people to the show, which combines pantomime, everyday gesture, modern dance, spoken text and music in a series of short vignettes.

So fear not, he advises dance newbies: “If you don’t understand one section, you’ll probably find the next one very funny or enjoy the music. There’s a broad-enough range of movement in this piece to speak to everyone.”