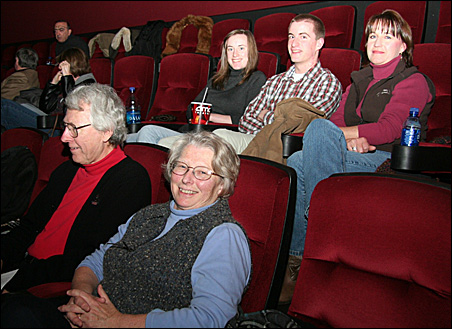 MinnPost photo by Paul Nolan
Don and Judy Henderson, foreground, are longtime opera fans who regularly attend the Minnesota Opera. The Metropolitan Opera’s “Macbeth” was the first opera experience for Cody Blades, 20, her brother Trent, 17, and their mom, Holly.

The young cashier at the AMC Eden Prairie 18 movie complex was almost apologetic as she rang up my ticket for the Saturday matinee.

“Twenty-two dollars,” she said hesitantly, as if expecting me to protest loudly and ask to speak with the manager.

But I knew the cost going in and politely handed her my credit card. (Tickets are $15 for students and $20 for seniors.) After all, I wasn’t paying to see “Alvin and the Chipmunks,” or even to watch Johnny Depp warble his way through “Sweeney Todd.”

I was going to the opera — my first! And not just any opera, but the Metropolitan Opera in a live, high-definition simulcast that was beamed to about 600 theaters around the country as part of the Met’s effort to bring opera to the masses in movie theaters. Saturday’s live performance was a bonus, a story that I was familiar with and could actually follow: Giuseppe Verdi’s version of “Macbeth.” (The opera is sung in Italian with subtitles running across the bottom of the screen, just as they do on a screen above the stage at the actual performance itself.)

According to the Met’s website, those who attended the live performance paid anywhere from $15 to $375 for the matinee.

It was the third Met performance this season that has been shown on the big screen. Five more operas will be shown through April. Six were shown last year, the Met’s inaugural season of bringing opera to the masses via the cineplex.

Big-screen opera drawing well
Opera in the ‘burbs has played well, says David Bresette, general manager of the Oakdale UltraScreen Cinema, one of six area theaters that screen the Met performances. Audiences are generally older (about 120 people attended the simulcast in Eden Prairie, and three-fourths of them appeared to qualify for the senior citizen discount).

“Some people dress to the nines and really make an event of it,” Bresette says. Others enjoy the relaxed atmosphere that they wouldn’t get at a real opera hall and like the opportunity to grab a bucket of popcorn and a Coke at intermission.

For the theaters, it’s a welcomed revenue stream in an industry that has suffered through soft sales in the past year. AMC officials would not disclose details of its contract with National CineMedia, the company that brings the Met to the big screen.

Local theater managers, however, did say they have sold out their large, 300-seat theaters more than once for these performances. Area theaters also filled up for a live Garth Brooks concert last fall, as well as a taped screening of Celine Dion’s final performance last month at Caesars Palace in Las Vegas.

A broadcast of the Met’s “Romeo et Juliette” in December with a rebroadcast one day after the event drew an audience of 97,000 worldwide. With gross weekend sales of $1.65 million, that broadcast would have been No. 11 at the movie box office. The Met sold more than 200,000 tickets to its six broadcasts last season, according to National CineMedia spokeswoman Michelle Portillo.

Movie theaters have screened live performances of music and sporting events for many years (National CineMedia began offering events in 2002), but Variety, which covers the entertainment industry, reports that these events have attracted only small audiences. The Met performances have been among the most successful in terms of ticket sales.

And if imitation is a sure sign of success, the San Francisco Opera late last year announced its own plan to transmit taped performances to theaters and the Royal Opera in London is also working on a movie house plan.

Metropolitan Opera General Manger Peter Gelb introduced his idea of bringing opera to suburban cineplexes with hopes of winning a new — and younger — audience. But the HD broadcasts, with their close-up shots and backstage interviews, could prove so successful in their own right that a new crop of fans prefers the movie house experience to the real thing.