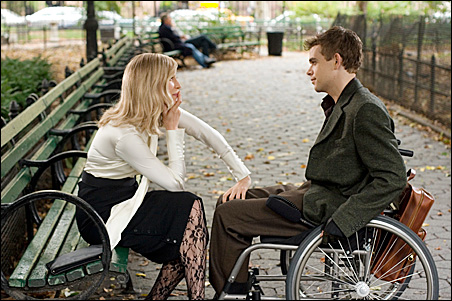 PARK CITY, UTAH — Sarah Pillsbury — Oscar-winning filmmaker and accomplished activist and descendant of the milling family — has the thick skin of a born Minnesotan.

Minutes after the Sundance Film Festival’s world premiere of “Quid Pro Quo,” the romantic drama she co-produced with longtime business partner Midge Sanford, Pillsbury suggests that the best place to give an interview is outside. “Park City is balmy compared to Minnesota,” she says, leading us out the door of Sundance’s library venue. “Let’s just stand in the snow.”

Why not? Pillsbury lives most of the year in sunny Venice, Calif., but reacquainted herself with below-zero temperatures recently while working with the Minnesota Council of Nonprofits on voter participation issues. “Quid Pro Quo,” set in New York City, follows the relationship between a paraplegic public radio reporter (Nick Stahl) and an able-bodied woman (Vera Farmiga) who longs to be disabled. But its concerns aren’t far from home for the activist.

Putting people in a different place
“The movie fits with what I like to do,” says Pillsbury. “You want to be able to lift people up and put them down in a slightly different place.” The loud applause that followed the world premiere suggests the film achieves just that.

Pillsbury, great-granddaughter of miller Charles Pillsbury and daughter of former Republican Sen. George Pillsbury, has been involved with filmmaking since the 1970s. Her Oscar for co-producing the short film “Board and Care,” about mentally disabled patients, came in 1980.

In the years that followed, she and Sanford produced several bona fide classics of independent film, including “Desperately Seeking Susan,” “Eight Men Out,” and “River’s Edge,” the enduring cult movie about small-town teenage murder, which premiered at Sundance in 1987. “Quid Pro Quo” represents Pillsbury’s first producing credit in nearly a decade.

No country for old women?
“We’ve been joking that Hollywood is no country for old women,” laughs Pillsbury, hardly old at 56. “Four of my first five movies with Midge were funded by companies that are no longer in business. The consolidation of media ownership in the late ’90s radically changed the industry, so we sat out for a while. We thrived at a time when the business was much more entrepreneurial and independent than it is now.”

“Quid Pro Quo” shows Pillsbury playing by the new rules of the filmmaking game. Economically speaking, the $2 million film is the product of a fully integrated corporation: Mark Cuban’s HDNet Films, whose work is distributed by Cuban’s Magnolia Pictures and screened in his Landmark Theatres venues nationwide.

“We’re glad to know we have distribution,” says Pillsbury. “A lot of wonderful films have screened at Sundance and never been released.”

“The movie is really about the question of what makes us feel authentic,” Pillsbury says. “What do we imagine would be our best self? I used to joke that in Minnesota there was no premium on being blonde. When I was 11 or 12, instead of being blond, I wanted to be a redhead with freckles named Ginger.”

Characteristically Minnesotan or not, Pillsbury — “tall and blonde and loud,” with a “brand name,” as she told Los Angeles Business Journal — continues to distinguish herself.

Pillsbury the filmmaker: once and always a Minnesotan