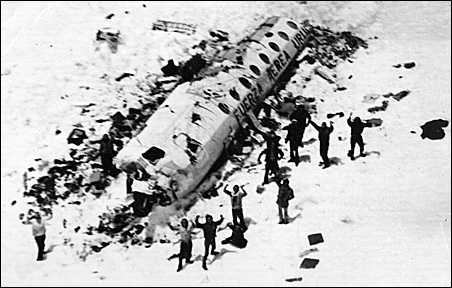 Ethan Productions
Survivors wave in the documentary “Stranded: I’ve Come from a Plane that Crashed on the Mountains.”

PARK CITY, UTAH — The Sundance Film Festival often seems like it exists in some otherworldly, high-altitude bubble, what with its bevy of celebrities and ski bunnies, its bluebloods with Bluetooths and biodiesel-fueled adverts on wheels, its sunshiny pseudo-indies and late-night chalet schmooze-fests, its … oh, well, after decades of Sundance dispatches, these are all terrible clichés, so let me stop here.

Besides, my point is to suggest that the world beyond this overpopulated and absurdly pricey ruling-class resort town does manage periodically to pierce the Sundance bubble, to let some of the thin air out of it. The way I see it, three events this year sent Park City reeling even more than the movies: the industry’s ongoing writers’ strike, the stock market’s plunge and the tragic demise of actor Heath Ledger.

Sundance ’08 kicked off at high-speed almost two weeks ago with the buyers’ feeding frenzy that everyone had predicted. In the absence of new product caused by the strike and with no end in sight, to borrow the name of last year’s Sundance breakout, the indie bidding war was declared by the big-bucks likes of Fox Searchlight (“Juno”). And this war became hell for the soldiers on the ground (critics and other journalists).

How to terrify the scribes
Early on, screenings restricted to “press and industry” unsurprisingly favored the latter group when it came to seating in cramped quarters. A 9 a.m. show of Gonzalo Arijon’s documentary “Stranded: I’ve Come from a Plane that Crashed on the Mountains” — scary enough for any white-knuckle flyer over Utah hills — put the fear of a shutout into the hearts of frantic scribes, 150 of whom were, uh, stranded at the door (including a reviewer for Variety).

Deals were made indeed: Focus Features shelled out a reported $10 million for the mostly unfunny comedy “Hamlet 2,” with Steve Coogan as a high-school drama teacher of questionable ethics and taste; Paramount Vantage snapped up “American Teen,” documentary of mood-swinging high-schoolers made by a filmmaker of, uh, questionable ethics and taste; and HBO Films and the Weinstein Co. split the rights to “Roman Polanski: Wanted and Desired,” doc whose topsy-turvy portrait of the mercurial pedophile-cum-victim makes even high school seem benign.

Black and bleak Tuesday
But that was before Black Tuesday, when the stock market’s cardiac arrest made an even hotter ticket of documentarian Patrick Creadon’s doomsayer debt-burden study “I.O.U.S.A.” — hotter for moviegoers, anyway, if not for film buyers, whose enthusiasms for acquisitions were suddenly curbed. As one who has always regarded economic collapse as the most frighteningly plausible of catastrophe scenarios, I forced myself to confront my fear of “I.O.U.S.A.” and found it insufficiently alarming and disappointingly easy to take.

Rather, the Great Depression for me came with the same day’s news of Heath Ledger’s death, which was even sadder for how it seemed to divide the town. Feeling raw from the loss of this vulnerable young actor, I actually fled a dinner party before drinks and appetizers in part because business as usual seemed, sorrowfully, still in effect. Was Ledger useful only to celebrity journalists who tactlessly broke the news to actors by way of collecting quotes? One of a bad day’s many lessons: Much as a great actor might channel the shaky spirit of James Dean, it’s not 1956 anymore; our fractured culture has made it so that we don’t seem to have anything in common, not even sympathy for fallen stars.

Another lesson of Sundance ’08: Pain is relative. Particularly for a writer without an all-access Express Pass, the Sundance experience can be grueling: Amid the constant hustle to try to push one’s way into screenings and plan impossible schedules (one of mine is here), a critic can spend hours, say, waiting for “Stranded,” only to get left at the door. The writer resorts to email and fax and phone to beg and bug publicists for tickets; there’s barely any time to think, much less write. Not just the ice makes this environment feel slippery; no wonder one colleague spent much of last year’s Sundance in tears.

Grounded again
And yet the critic’s woe is nothing compared to, say, being female in the Congo (“The Greatest Silence: Rape in the Congo”) or new to the United States (“Sugar”) or poor in the Mississippi Delta (“Ballast”) or destitute in New Orleans (“Trouble the Water”), to name a few of the best movies I saw at Sundance this year. Park City’s slushy streets and high altitude aside, this glitzy fest, with its perennial focus on the plight of the underprivileged, is firmly grounding.

Stranded at Sundance with circling sharks